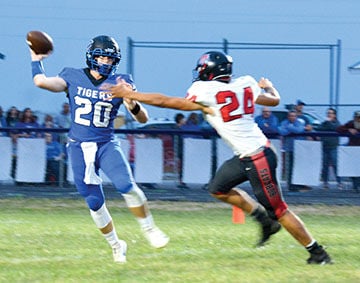 No. 24, Gunner Bryant, keeps the pressure up on the Tiger’s quarterback in Bowling Green’s 28-14 win over Mark Twain. Photo by Stan Schwartz 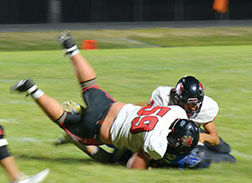 No. 24, Gunner Bryant, keeps the pressure up on the Tiger’s quarterback in Bowling Green’s 28-14 win over Mark Twain. Photo by Stan Schwartz

CENTER—The undefeated Bobcats traveled to Center to face off against the undefeated Mark Twain Tigers Friday night in what was an epic game between these two teams.

The Tigers won the toss and put their offense on the field first against a well-rested and well-trained defensive Bobcat line. The Bowling Green Team’s Homecoming game was cancelled the week before because the Montgomery City team had a COVID restriction and had to forfeit the game. No other team could be found in time to play in Bowling Green.

The anticipation was evident. Bobcat fans filled the visitor’s stand and lined the fence more than half way around the field.

The Bobcat defense held the Tigers to their side of the field in the first set of down, forcing a punt. The Bowling Green offense moved the ball well picking up a few first downs, before No. 1 Marcus Starks found the opening created by the Bobcat offensive line and sprinted 41 yards into the Wildcat end zone, putting Bowling Green on the scoreboard first. A 2-point conversion attempt was stopped by Mark Twain, leaving the score at 6-0 for the Bobcats

“I was really happy with our kids showing resilience when facing adversity,” said Bowling Green head coach Joe Chinn. “I have to give Mark Twain and coach Austin Leake a lot of credit. They came ready to play and were playing with confidence. But overall our kids battled all night and really never let things get to them.”

Mark Twain showed came to life during the kickoff, running the ball back into Bowling Green territory. They kept moving the ball downfield, but an off-sides call killed their momentum. The next play Bowling Green sacked the Mark Twain quarterback forcing them to punt. The Bobcats started at their own 22-yard line.

The Mark Twain started to get a better read on the Bowling Green offense making it slow going forcing a punt.

The end of the first quarter had Bowling Green still in the lead 6-0.

During the second quarter, Mark Twain moved the ball well into Bowling Green territory. The Bobcat defense brought the Tigers’ offense to a crawl when an off-sides penalty gave Mark Twain a first down. But that was offset on the next play with a Mark Twain penalty. Then the Bobcats sacked the Wildcat quarterback with a big loss of yardage.

On the next play, Mark Twain’s quarterback did a lateral pass to the halfback, who threw the Tigers first touchdown of the game. That tied it up at 6-6.

Once Bowling Green had possession of the ball gain, the offense was on the move. After the kickoff, No. 1, Marcus Starks busted through the Wildcat line for huge gain deep into Wildcat territory.

Two plays later, No. 6 Dylan Dalton ran into the end zone with a quarterback keeper. The 2-point conversion was good moving the score to 14-6.

Neither team could score the rest of the half.

At the start of the third quarter, Bowling Green fumbled the ball giving the Tigers good field position. But they could not take advantage of the turnover, with Bowling Green taking over on downs.

Marcus scored again in the third, from the 28-yard line. Another 2-point conversion try failed, leaving the score with Bowling Green in the lead 20-6 with just over 3 minutes to play in the quarter.

Even though Chinn was happy with the teams’ performance, he noted that “there are several things we need to work on. One of them being turnovers. We had a couple of costly turnovers—one’s we can’t have. And the penalties. Because of the fumble and all the penalties we allowed Mark Twain to score in the fourth quarter to pull within two scores.

“But in the end we made a big play and Dylan Dalton forced a interception to seal the game.”

Another touchdown and 2-point conversion in the third quarter by Bowling Green put the score at 28-6 going into the fourth quarter.

Three big penalties against Bowling Green gave the Tigers three first downs and ending up on the Bobcats’ 1-yard line. A quick score, but a good 2-point conversion moved the Tigers closer to Bowling Green, but still short at 28-14.

At the end of the fourth quarter, Bowling Green handed Mark Twain their first defeat of the season.

Marcus Starks had 21 carries for 221 yards and three touchdowns.

Chinn said there is a big home game this coming Friday—Bowling Green versus North Callaway.

“Both teams are undefeated in EMO play,” he noted. “We hope to have another big crowd!”