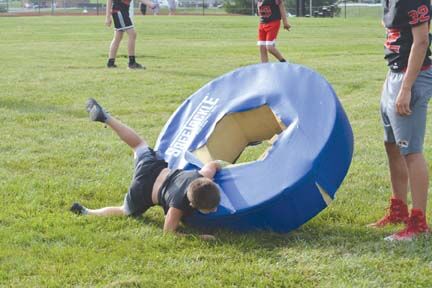 Taking down the donut. Learning the fundamentals of tackling. Photo by Stan Schwartz 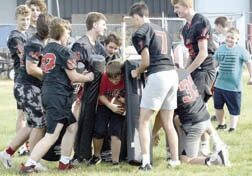 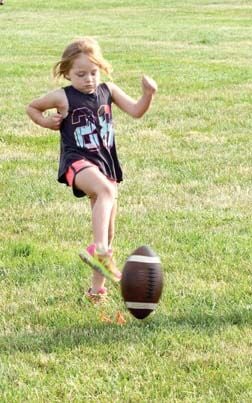 Taking down the donut. Learning the fundamentals of tackling. Photo by Stan Schwartz

The camp was supposed to run Thursday and Friday morning, but rain on Friday cut the camp to just one day. But what a day it was. Children from grades kindergarten to sixth grade were put through some of the drills football players have to face when they’re practicing for a game.

New head football coach Joe Chinn was surprised and pleased to see so many children come out for the camp.

“It was a lot more than I was expecting,” he said. But he was pleased with the turnout and with the high school team football players who also were there to help run the camp, putting the young attendees through their paces. They were extremely patient and understanding with the young students. As with any game, the goal is to win, but have fun doing it.

“There are a lot of kindergarten and first graders here,” he added. “Which is pretty cool.”

Because the school’s gyms were closed, Chinn said, if there were rain, they would have to cancel the next day’s camp. And that is what happened. With all the activities the school has planned leading up to the start of the next school year, Chinn said they would not be able to make up that camp day.

“It was really great seeing that many kids excited about football in Bowling Green,” he said. “It was also a great experience for our older kids to work with the youth players. They did a great job and made it a lot of fun for them.”

The varsity camp starts the last week of July. At the end of the week, the team will travel to Troy to scrimmage with the Troy and Hannibal teams.