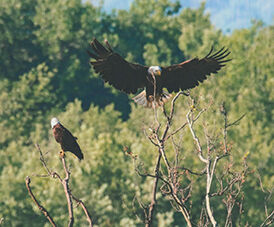 Eagles Jack and Jill, on the Pitzer farm. Photos by Russ Adams 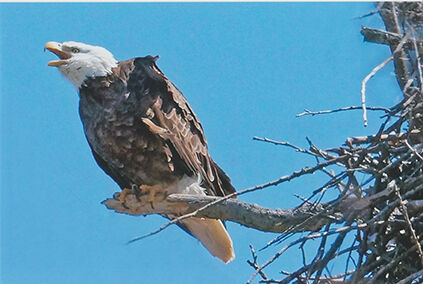 Eagles Jack and Jill, on the Pitzer farm. Photos by Russ Adams

The story of Jack and Jill

Just a few miles outside of Louisiana, a beautiful farm overlooks the Mississippi River. Cows, dogs, and other animals that one might expect to find out in the country roam the farm. Oh, and there are a few others that might come as a surprise to some.

Glenda Pitzer, who owns the farm, has two exceptional winged residents that live there as well.

About 10 years ago, Glenda first discovered a mated pair of bald eagles nesting in one of her trees. She remembered observing them those first few years.

“I named them Jack and Jill for a fun and easy way of referring to them,” she said.

“Every year, they were adding to their nest and it was growing large. I had heard and read that eagles nests can weigh as much as 1,000 pounds. One day, I was informed by someone that the nest had fallen to the ground.” The tree limb supporting the massive nest had given way.

“I was just sick about it,” she said. “I remember thinking that Jack and Jill were gone forever.” But low and behold, instead of flying the coup, so to speak, they instead moved to a big sycamore tree behind her house, she added.

After an incident with high winds, the eagles suffered yet another fallen nest. But to Glenda’s delight, they rebuilt in the same tree and remained on her property. As the years have gone by, the eagles have not only continued to add on to their nest, but they have also built new friendships for Glenda.

“I had a gentleman come to my door one day and ask if he could take pictures of the eagles. After setting up his camera on the deck, he captured some amazing photos. As time went on he returned with his wife for more photos. Now we have become dear friends. As a result of all the photos he took, he was able to create a photography book of the eagles for me,” she said.

“There was another time that a lady was parked down at the end of my drive attempting to capture some photos. A law enforcement officer stopped in and encouraged her to come up to the house and meet me. She did, and now we are good friends as well,” noted Glenda.

She said she wonders just how many mighty eagles out there were born in that sycamore tree. One year, added, they had three eaglets in their nest. At around five months they become juveniles and soon after that, they are kicked out of the nest, so to speak, to strike out on their own. Once they have left the area, they do not return again. Glenda watched a maturing eaglet as it prepared to learn how to fly.

“At first, it would stand on the edge of the nest and flap it’s wings as it jumped up and down. Looking through a scope, I could actually see its feet coming up off of the nest as it would jump. After that, it would edge out onto the limb. Every day it would go a little further away from the nest. I was able to see it’s first leap and it was so much fun to watch.”

Other visitors that have come out to see the eagles include an agent from the Missouri Department of Conservation, who confirmed that it was a nesting site. Glenda continues to watch, and photograph Jack and Jill from her deck as they nest, fly and even swoop down to hunt small animals.

“I have seen them take fish back to the nest and small game, like rabbits. I have even seen one of them grab up a snake from the ground,” she said.

Bald eagles have been the U.S. national emblem since 1782. In 1940, noting that the species was “threatened with extinction,” Congress passed the Bald Eagle Protection Act, which prohibited killing, selling, or possessing the species. A 1962 amendment added the golden eagle, and the law became the Bald and Golden Eagle Protection Act. Adult bald eagles are powerful, brown birds that may weigh 14 pounds and have a wingspan of 8 feet. Male eagles are smaller, weighing as much as 10 pounds and have a wingspan of 6 feet. Some eagle nests stay small, but some can reach 10 feet across and weigh 1,000 pounds. The largest recorded bald eagle nest, located in St. Petersburg, Florida, was 9.5 feet in diameter, 20 feet deep and weighed almost 6,000 pounds.