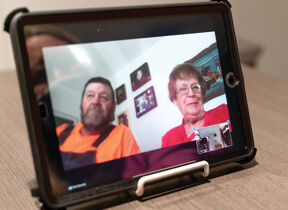 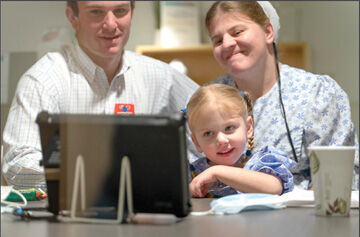 LOUISIANA—Margaret Reynolds has been living in Louisiana since 1978, but about 4 years ago, she and her husband, Mike, moved to Minnesota to help their daughter with her autistic children.

“That’s when I got sick,” Margaret said. “When I turned 70, they told me they weren’t going to give me a liver.”

Margaret had entered end-stage liver failure as a result of complications related to non-alcoholic fatty liver disease and liver cancer, according a release from the hospitals that performed the surgeries.

With little hope in sight, Margaret said, “Well, if that’s the way it’s going to be, then I want to go home.”

She and Mike did that, moving back to Louisiana, and bought a little A-frame home.

“Most people who get this kind of liver disease are alcoholics,” she said, “but in my case that wasn’t it.”

But it wasn’t too long before Margaret was told that there was a possibility of a life-saving liver transplant. At first she was told she would be getting a liver from a 5-year-old boy. And the donor’s family was told the liver would be going to a 17-year-old boy.

Margaret said she believes this was to keep patients’ information private.

According to information from St. Louis Children’s Hospital and Washington University and Barnes-Jewish Transplant Center in St. Louis, “Domino liver transplantation is where surgeons take a healthy liver from a patient with a metabolic disease who has already received a new liver and transplant it into a patient with end-stage liver disease. The first patient receives a liver from a deceased donor, which essentially cures the metabolic disease, then his or her native liver saves the life of the second patient. The expectation is that the second patient will not develop any diseases from the first patient, because unlike the first patient, he or she is not genetically pre-disposed to the metabolic disease.”

Also, as part of the patient protection, there is a six-month wait before either party can ask to meet the other. The parents of 3-year-old Jalisa Zimmerman, Mennonites from Versailles, Mo., were eager to know who received their daughter’s liver.

They first got to meet by Zoom last November. That’s when Margaret and the Zimmerman’s learned about each other.

According to the hospital, “Jalisa has Maple Syrup Urine Disease, a rare, life-threatening genetic disorder where the body’s enzymes cannot break down certain amino acids; when these amino acids accumulate, they become toxic and can cause severe health issues. There were no issues with Jalisa’s liver; this condition; however, did not allow for her liver to function properly, putting her life at risk and in need of a liver transplant. Although MSUD is rare, it happens more often in Mennonite communities. Jalisa lives with her parents, Lamar and Rose, just a few miles north of the Lake of the Ozarks, near Versailles.”

Margaret said that because she and Jalisa share the same rare blood type, it made the transplant a possibility.

In Mennonite communities, children are brought up in the home learning the Plautdietsch language. Children don’t start learning English until they go to school.

So, for Margaret and Jalisa, even though they could see each other on the computer screen, they couldn’t really have a conversation.

Margaret said she and Mike plan on going to Versailles when the weather gets better.

“She’s a quiet little girl,” Margaret said. “She had beautiful pigtails, and she’s so little.”

Margaret was thankful for all the support she received from the people of Louisiana. Friends tried to donate parts of their livers, “but no one eligible because of my rare blood type,” she explained.

Margaret worked both in Louisiana and Bowling Green, but mostly in Louisiana. Some people might remember when she worked at Abel’s Quickstop washing cars, when it was still a gas station.

When she got the call about the liver transplant, Margaret said she started crying. “But they were happy tears,” she added.

Before the news, even though she was fighting the disease as hard as she could, Margaret was resigned to her fate. After the call, she renewed her efforts.

The new liver would give her a chance to see her grandchildren grow up. One grandchild is 28-years-old from a previous family and the two younger boys—7 and 9, have special needs. Margaret said they both have autism.

The one-year anniversary of her surgery is coming up in February.

“I got to come home five days after the transplant,” she said. “The little girl had to stay like 2½ weeks. It was such a miracle.”

According to the hospitals, “While domino transplants are not rare, they do not happen on a regular basis—especially from a child to an adult,” said Majella Doyle, MD, MBA, FRCS (I), liver transplant surgical director for both the Washington University and Barnes-Jewish Transplant Center and St. Louis Children’s Hospital. “There is quite a bit of coordination between adult and pediatric transplant teams and the organ procurement organization, Mid-America Transplant. The high level of expertise and collaborative nature of the Barnes-Jewish and St. Louis Children’s Hospital transplant programs allow for us to even consider such lifesaving transplants between child and adult programs. Choice of recipient is determined on many factors including blood type and size of the liver being dominoed.”

Margaret noted that people with Jalisa’s disease have enlarged livers, so it fit just right when they did the transplant.

She goes every two weeks to get her liver tested to make sure it’s functioning right. She also wants to donate the liver back once she does die.

Margaret said she if feeling great. She walks often at the YMCA in Louisiana with her husband. And it was her family that kept her going. One daughter that lives in the area made sure she got to all her appointments on time before the liver transplant and was right there by her side through everything.

Margaret said her family was really excited after learning about the possibility of a transplant.

According to the hospital, “Jalisa’s mom says her daughter is doing well after the transplant. “It’s amazing,” she said of the domino transplant. “I don’t understand myself how Jalisa’s liver works for someone else if it didn’t work for her, but hey, it works!”

For more general information on organ transplantation or becoming a living donor, visit BarnesJewish.org/transplant or call 314-362-5365. This number begins the living donor screening process at the Washington University and Barnes Jewish Transplant Center.