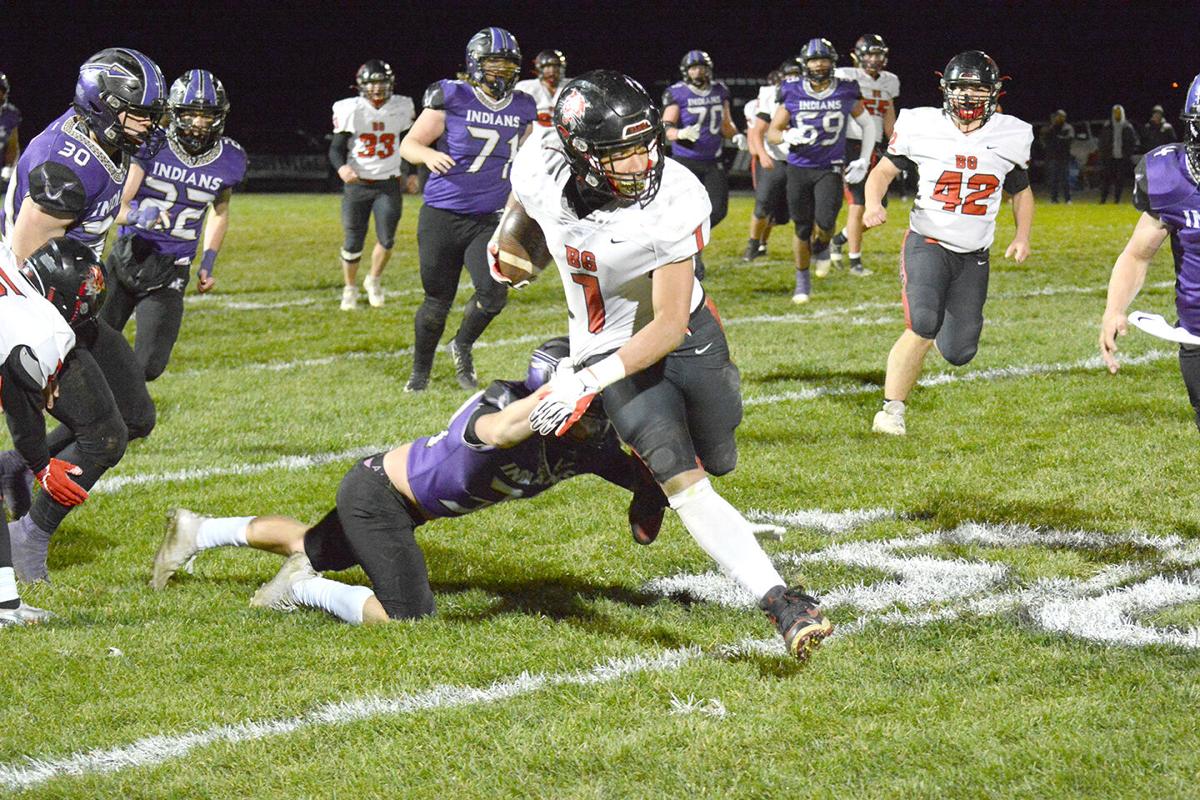 No. 1, Marcus Starks, kept his eye on the end zone as he broke at least three tackles to gain major yardage for the bobcats. Photo by Stan Schwartz 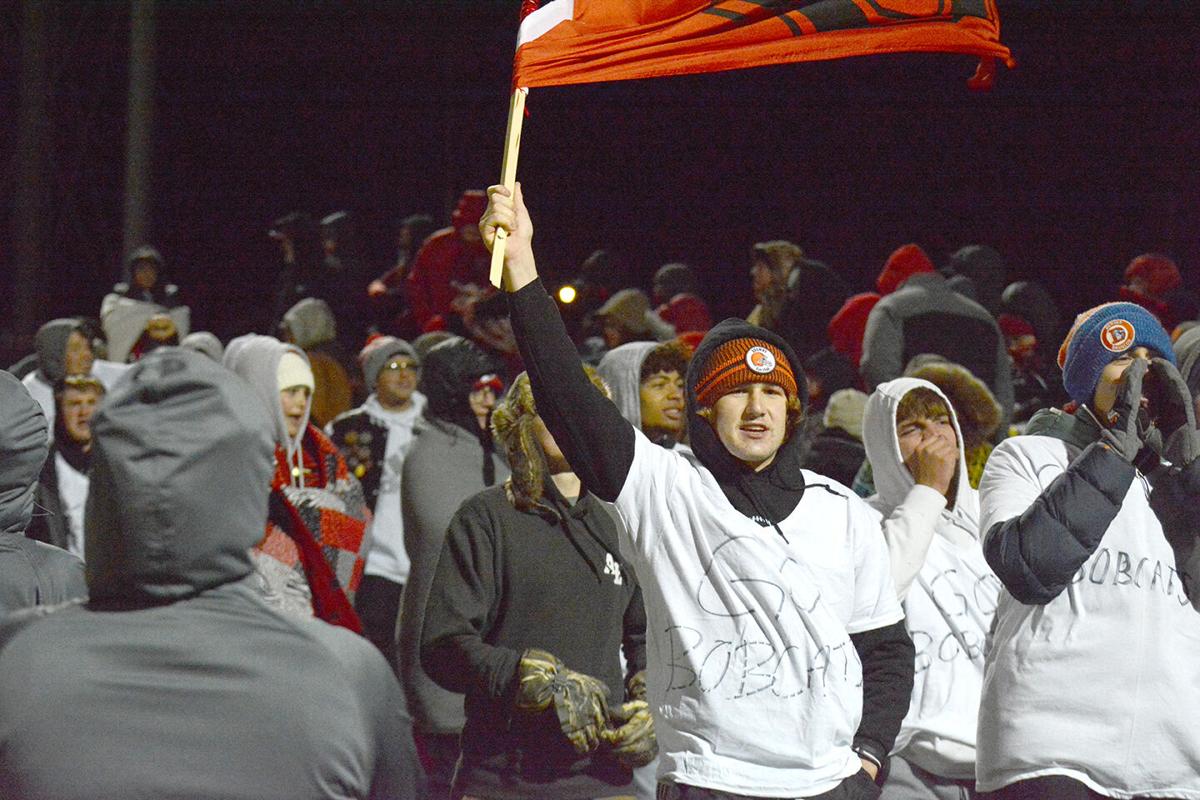 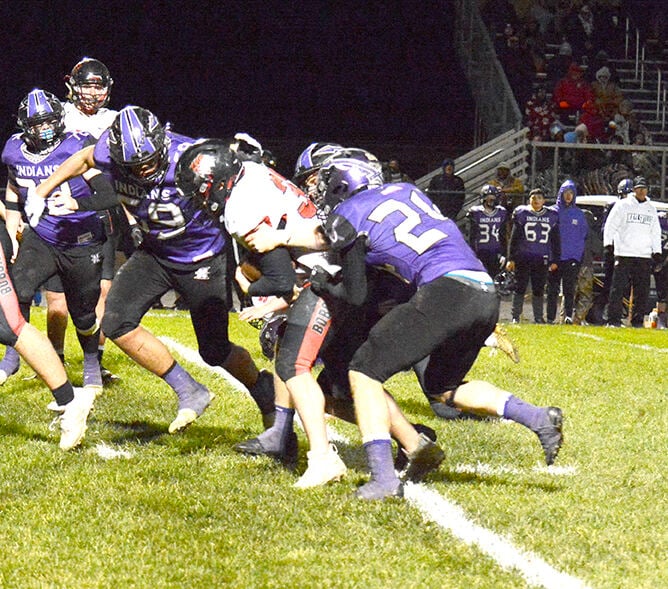 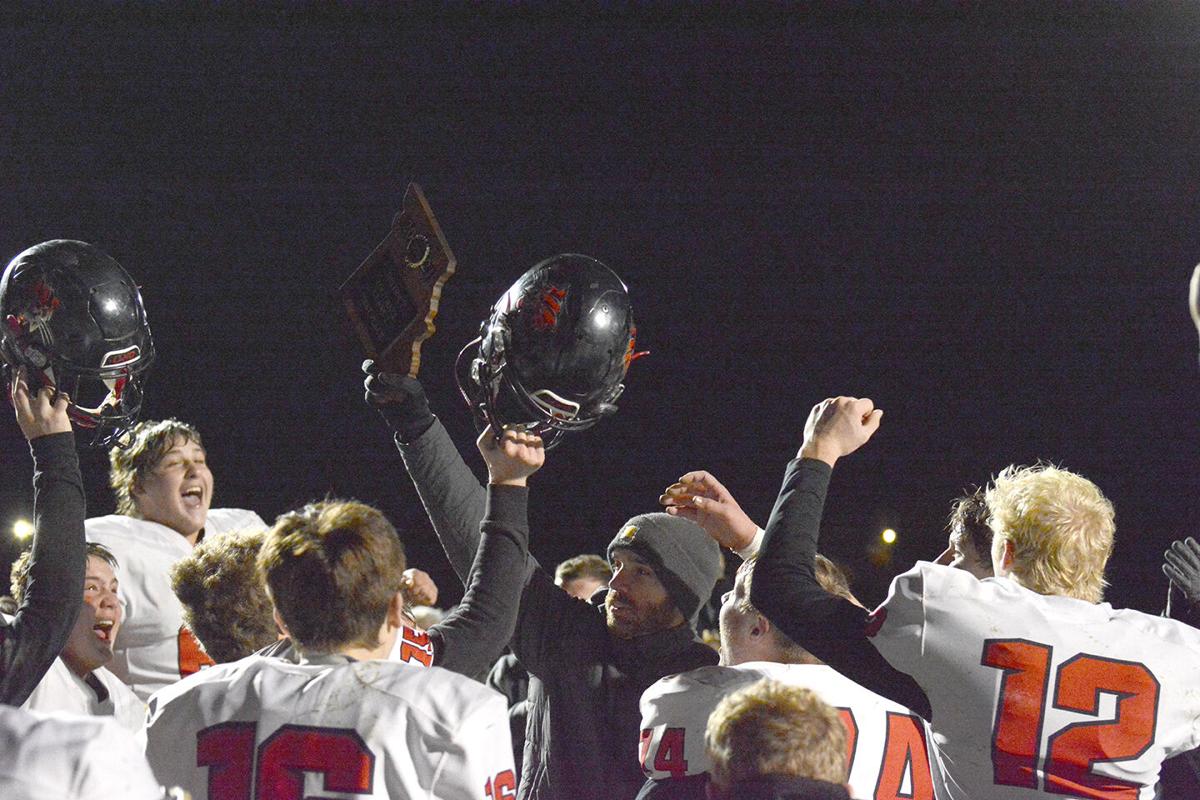 No. 1, Marcus Starks, kept his eye on the end zone as he broke at least three tackles to gain major yardage for the bobcats. Photo by Stan Schwartz

HALLSVILLE—With snowflakes shooting through the air on icy winds, the Bowling Green Bobcats traveled to Hallsville to face the undefeated Indians.

But it would be the Bobcats who maintained their undefeated status at the end of this contest between two tough teams.

The Indians got possession of the ball first but ran head first into a tight, well-coordinated Bobcat defense, which forced them to turn over the ball.

There was not much accommodation for guest spectators. Every bleacher was filled and the Bowling Green fans lined the edge of the field. Bundled and buried under layers of clothing and blankets, they still cheered into the frigid night.

When Bowling Green took over possession of the ball, they were in the Indian end zone in just a few plays. A good 2-point conversion put the score in favor of the Bobcats 8-0—a lead that they would not relinquish the entire game.

Once back in possession of the ball, the Indians tried to get their momentum going. Every inch gained was a struggle against the Bobcat defense. They were able to get through the offensive line and take down the runners and the quarterback behind the line of scrimmage, forcing the Indians to punt.

No. 1, Marcus Starks, returned the ball deep into Indian territory at the 22-yard line. The next play put the Bobcats at the Indian 9-yard line, then the 6-yard line. And then they were across the goal line for another touchdown. While attempting another 2-point conversion an off-sides call pushed the Bobcats back 5 yards. The conversion attempt was no good, leaving the score at 14-0.

In addition to the people from Bowling Green there to cheer on their home team, players from the Centralia football team, wearing homemade Bobcat shirts, were on the sidelines rooting for their once rivals. Centralia faced Hallsville the week before and lost. Had Centralia won, they would have played the Bobcats in Bowling Green.

The Indians fought all the way down into Bobcat territory before being able to score a touchdown. Their 2-point conversion was good, putting the score at 14-8 in favor of the Bobcats.

Whatever thoughts about dominating the game were wiped away with that score. That just meant the Bobcats had to get down to business. On the kickoff, Starks ran the ball back to the Indian 15-yard line before being brought down. That put them in great field position for their next score. Time had run out in the first quarter, so the Bobcats scored again in the second quarter. A 2-point conversion was good, putting the score at 22-8, which brought the Bowling Green crowd back to life.

On their next possession, the Hallsville Indians were able to score again. Their 2-point conversion was good, putting the score at 22-16, with the Indians looking good to close the gap.

The Indian defense was able stop the next Bobcat drive, but just two plays into their series, a fumble put the ball back in Bowling Green’s possession. The Bobcats took advantage of that turnover and scored again, putting the score at 28-16. The after point was no good.

With that the clock ran out for the first half, leaving the score at 28-16.

At least three key players were sidelined with injuries during the game, still the Bobcats scored two more touchdowns, and allowing the Indians to put another 14 points on the board before the end of the game.

“I was really impressed with our guys!” exclaimed head coach Joe Chinn. “We knew going into that game it was going to be a four-quarter battle. And I couldn’t be more proud of how our kids played and battled all night. We had several key players leave the game, and the rest of the guys stepped up and came in and played and did a great job. I think they knew how important that game was so they really stepped up and played great!” he added.

Looking at the Bowling Green people who made the nearly 2-hour drive to Hallsville, Chinn said, “Our crowd like always was great. We have a great community that is supporting us and giving our kids all kinds of energy to feed off. Hope to see the same crowd next week in the quarterfinals.”

The next game will be on Saturday, Nov. 20 at Lafayette County.

“Having the extra day of rest this week will do our guys a lot of good after that physical of a game,” Chinn said.

Owen Niemeyer was one catch for 19 yards.