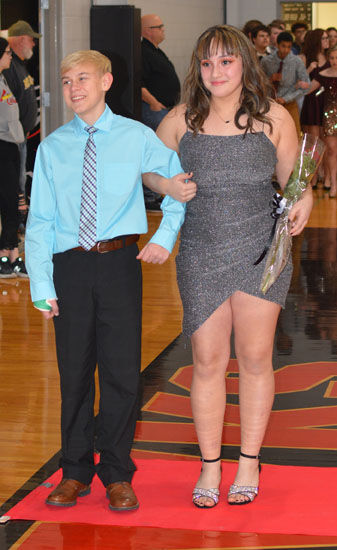 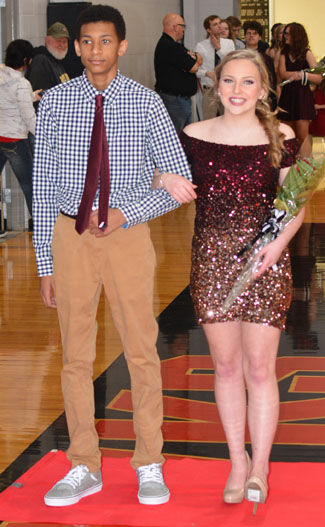 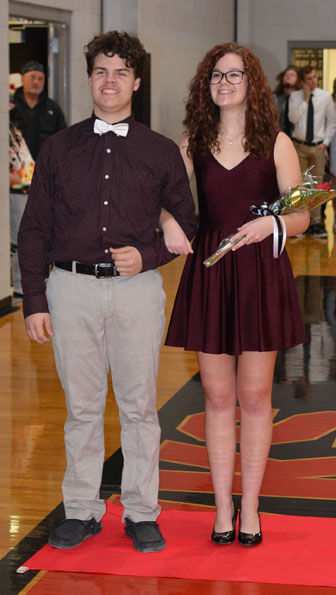 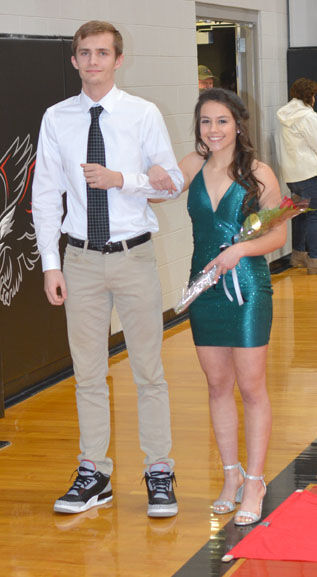 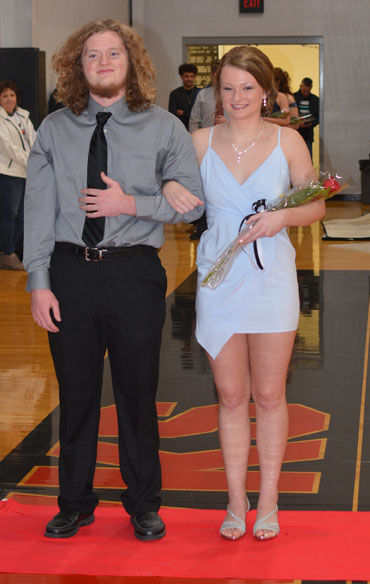 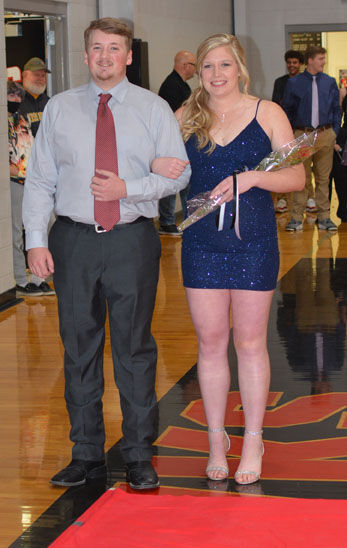 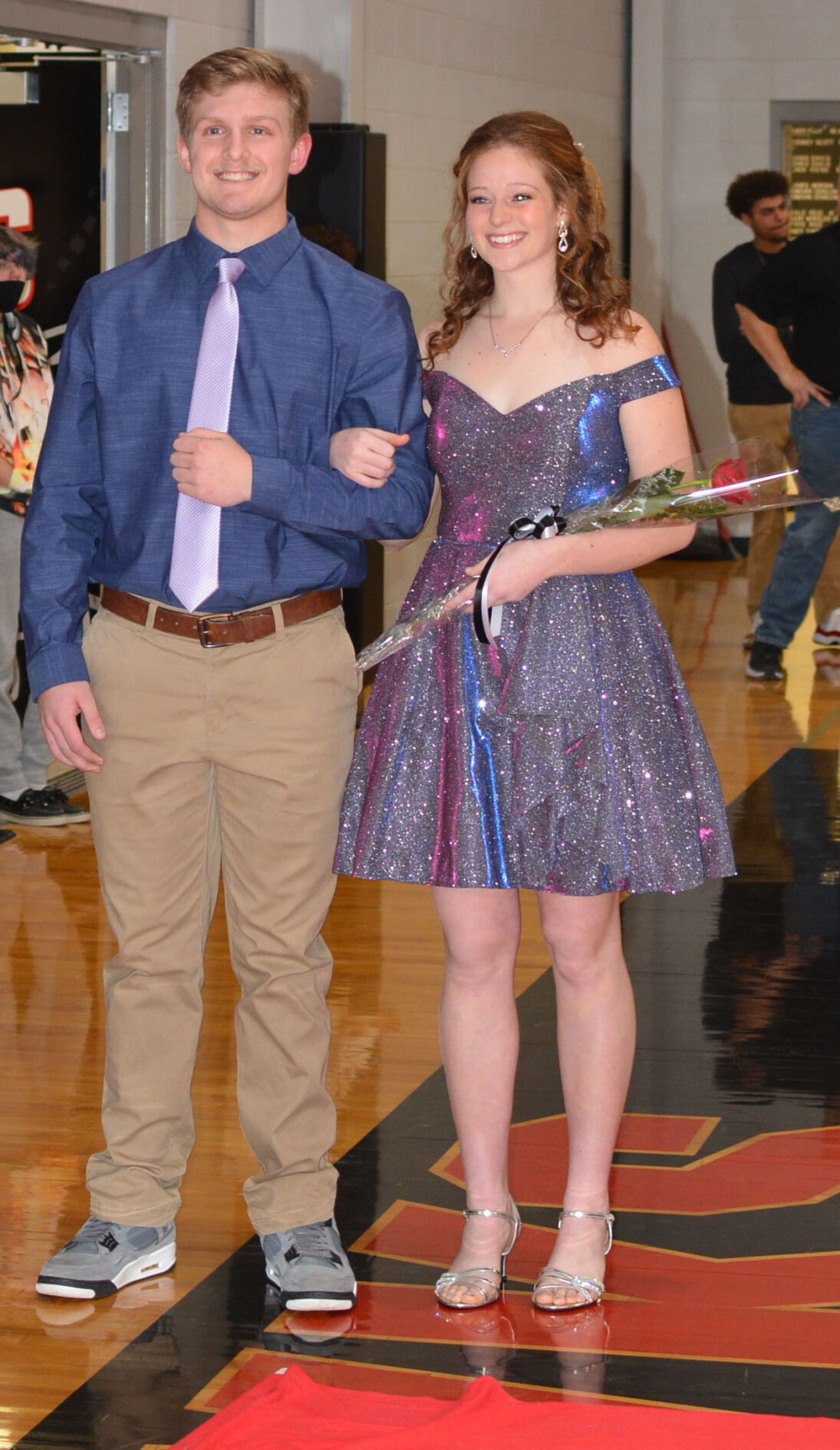 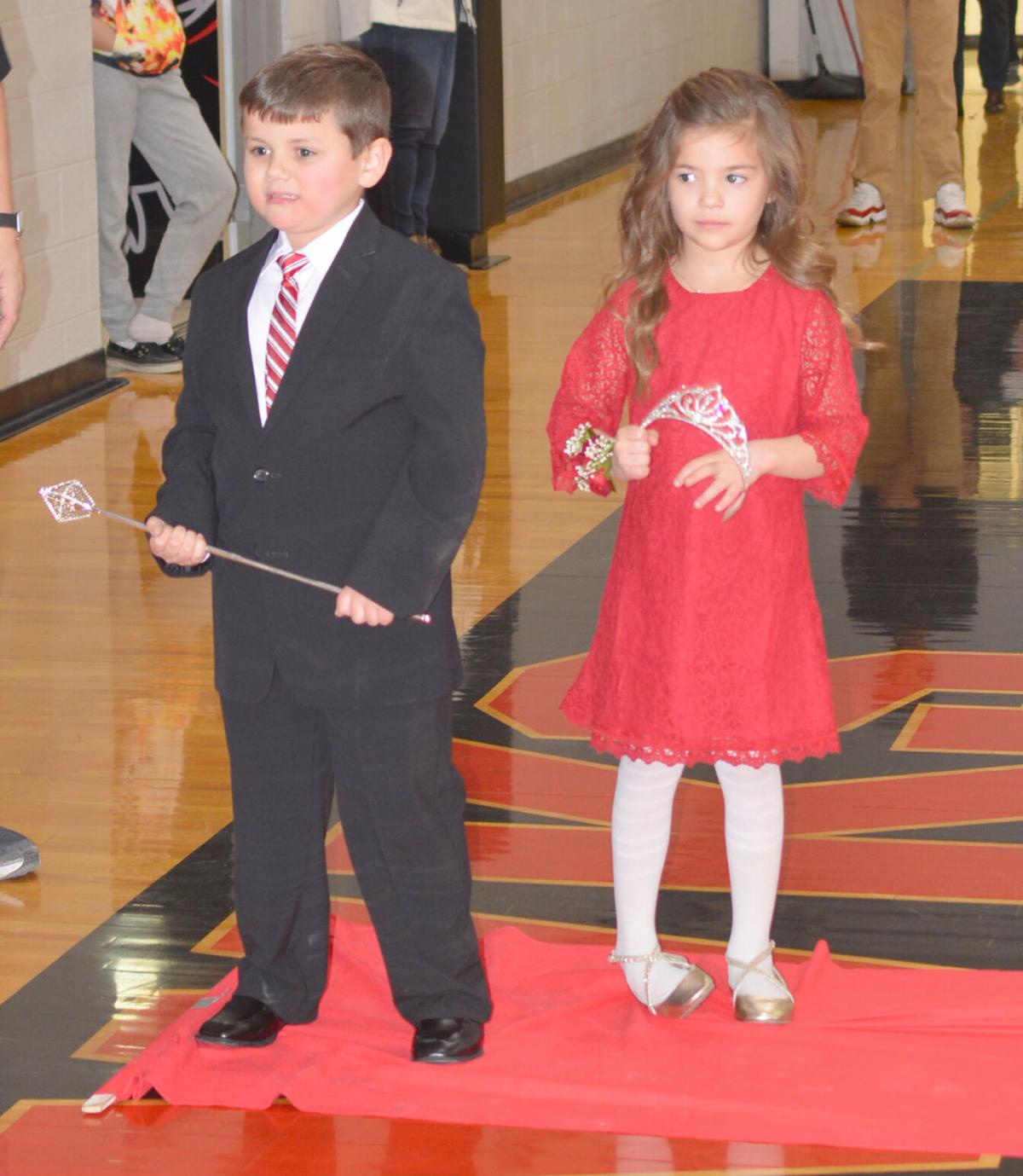 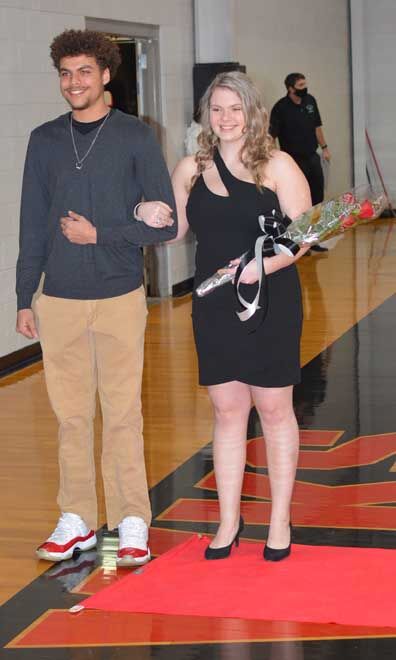 CLARKSVILLE—Between the JV and varsity basketball games here Friday night, the courtwarming court was named and the king and queen picked.

Starting off the night, were the freshman candidates, Jeaneya Bazan and Nick Myers.

Jeaneya is the daughter of Jeanette Bazan of Annada Mo. She is a member of the cheerleading squad, Softball team and plays travel softball. When not in school, Jeaneya enjoys making TikToks, sleeping, hanging out with the girls, and reading poetry. After high school, Jeaneya plans to join the military and become a trauma surgeon.

Nick is the son of Nick and Jackie Myers of Clarksville Mo. He is a member of the basketball team, cross country team, FCA, and student council. When not in school, Nick enjoys playing basketball. After high school, Nick wants to go to college and become an electrical engineer.

Next, were the sophomores. Representing the class of 2023 were Grace Palmer and Malik Marshall.

Grace is the daughter of Austin and Lindsey Palmer of Clarksville, Mo. She enjoys participating in cheerleading and plans to be on the track team this spring. When not in school, Grace likes learning about True Crime Cases and drawing. She also likes anything having to do with makeup. After high school, Grace would like to attend the University of Massachusetts in Boston in order to study criminology and forensic science.

Malik is the son of Gary Marshall of Lake St. Louis Mo., and Dawn Starks of Clarksville Mo. Malik is a member of the basketball team, the golf team and a member of the band. When he is not at school, Malik enjoys playing video games with his brothers and cousin. After high school, Malik plans to go to college and major in game development and work developing video games.

Next, were the juniors from the class of 2022—Macy Weitkamp and Lucas Martin.

Macy is the daughter of Paul and Meredith Weitkamp of Eolia Mo. Macy is a member of FCA, FFA, StuCo, Quiz bowl, Speech and Drama, Cross Country, Track, Cheerleading, NHS and Youth and Government. When she is not in school, Macy enjoys reading, running, fishing, listening to music, and watching Saturday Night Live.

Lucas is the son of Shane and DeeDee Martin of Eolia Mo. Lucas is a member of the football team, basketball team, golf team, FFA, FCA, StuCo, 4-H, and New Life Christian Church Youth Group. When he is not at school, Lucas enjoys hanging with friends, watching movies, and playing football. After high school, Lucas plans to go to a four-year college to study sports journalism.

The senior candidates came in next, representing the class of 2021. First, were Taylor Akers and Daniel Harvey.

Taylor is the daughter of Joe and Brenda Akers of Eolia, Mo. Taylor is a member of FFA, FBLA, FLS, and NHS. She also participates in cross country, basketball, and golf. When she is not in school, Taylor likes to go shopping and hang out with her friends. She also enjoys trap shooting. After high school, Taylor plans to attend a four-year university to major in Pre-Med or Nursing.

Daniel is the son of Mark and Denise Harvey of Eolia, Mo. He participates in cross country, track, basketball, Student Council, FCA, FFA, FBLA, and Quiz Bowl. He is also the Student Body president. Outside of school, Daniel likes to hang out with his brother Josh and his girlfriend Sarah. After high school, Daniel plans to run track in college and pursue a degree in Business.

Next were senior candidates Mary Margaret Garrett and Riley Walker.

Riley is the son of Devlon and Erica Walker of Eolia Mo. Riley is a member of FBLA, NHS, the Golf team, the Football team, and the Basketball team. Riley also participates in the A+ program.  When he isn’t in school, Riley enjoys spending time with friends and family and working. After high school, Riley plans to attend Westminster College to major in athletic training.

The third pair of candidates were Logan Hall and Evan Lagemann.

Logan is the daughter of Rob and Suzanne Hall of Paynesville Mo. Logan is a member of the basketball team, softball team, FFA, FBLA, FCA, FLS and Yearbook, When she isn’t in school, Logan enjoys shopping, spending time with friends and family and traveling. After high school, Logan plans to attend SEMO and major in early childhood education.

Evan is the son of Larry and Susan Lagemann of Eolia, Mo. Evan is a member of the boys basketball team, golf team, FFA, FBLA, FCA and Quiz Bowl. When he is not at school, Evan enjoys hunting, fishing, and hanging with friends. After high school, Evan plans to attend Mizzou and get a bachelor’s degree in natural resource science and management with an emphasis in fisheries and wildlife sciences.

Caragan is the daughter of Clint and Jenny Lockard of Eolia Mo. Caragan’s activities include basketball, softball, FFA, FCA, FBLA, FLS, and NHS. When she is not in school, Caragan enjoys hanging out with Mason and her friends, and watching NetFlix on her days off. After high school, Caragan plans to continue her basketball career and eventually become a coach.

Zakk is the son of Shari Black and Scott Eivins of Eolia, Mo. He participates in FBLA, yearbook, and NHS. He is also a member of the football team, basketball team, and the golf team. Outside of school, Zakk likes to play video games including Madden and Minecraft. He also likes to play Mario with the boys. His other hobbies include golf and Keno. After graduation, Zakk plans to attend Mizzou and major in Journalism.

Also recognized that night were the 2021 Courtwarming prince and princess. Representing the class of 2034, were first graders, Averi Lilley and Luke Grimes.

Averi is the daughter of  Rachel and Trevor Lilley of Clarksville Mo. She is in Mrs. Adams class. Her Favorite subject is math. At home she loves to watch TV and wake up her brother. When she grows up, Averi wants to be a zoo keeper.\

Luke is the son of Stephanie and Drew Grimes of Eolia Mo. Luke is also in Mrs. Adams class. His favorite subject is social studies. When he is at home, and it is warm enough, Luke loves to play on his Slip and Slide. When Luke grows up he would like to be a veterinarian.

Maleek McPike and Madison Horstmeier the retiring king and queen were also recognized.