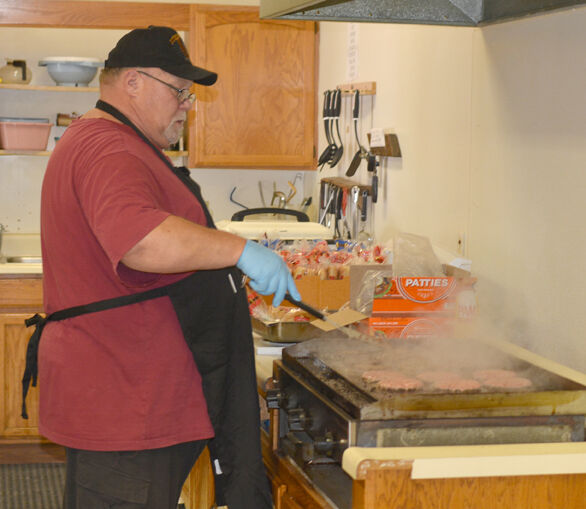 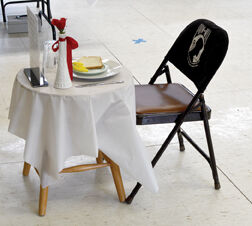 Inside, front and center was the POW/MIA table. A sign on the table explains the symbolism behind the place setting. Photo by Stan Schwartz

Inside, front and center was the POW/MIA table. A sign on the table explains the symbolism behind the place setting. Photo by Stan Schwartz

CLARKSVILLE—American Legion Post 349 Commander Pat McGuire said he wanted to do something to give back to the community, which is why he decided on providing a free lunch on Saturday in honor of Memorial Day.

Inside, front and center was the POW/MIA table. A sign on the table explains the symbolism behind what is there: “The white tablecloth draped over the table represents the purity of their response to our country’s call to arms. The empty chair depicts an unknown face, representing no specific soldier, sailor, airman or Marine, but all who are not here with us. The table itself is round to show that our concern for them is never ending. The single red rose reminds us of their families and loved ones. The red ribbon represents the love of our country, which inspired them to answer the nation’s call. The candle symbolize the everlasting hope of a joyous reunion with those yet accounted for. The slices of lemon on the bread plate remind us of their bitter fate. The salt upon the bread plate represent the tears of their families. The glass, turned upside down, reminds us that our distinguished comrades cannot be with us to drink a toast or join in the festivities of the evening.”

This is the first time the Clarksville American Legion post held a free lunch for Memorial Day.

McGuire said he didn’t know what to expect, crowd wise. They put the word out to as many places as possible, but because this was the first time for this event, he was not sure how many people would show up.

He was hoping for a big crowd, otherwise “I know what I’m eating for the rest of the week,” he said.

“We’ve done our Friday night fish fries,” said Kim McGuire. “And a few years ago, we did a Memorial Day barbecue with pork steaks. But this year, we decided on the hotdogs and hamburgers.”

COVID has had such a disruption on the community, Pat said, that he wanted to do something to give back to them.

“So I came up with this crazy idea, and thought I’d give it a try,” he said.

Also helping out was Kassie LaFave.

Pat added that he thought this would be a nice kickoff event for the unofficial start of summer.

Friday, June 4 is the post’s next fish fry, he noted.

Determining how much to buy for the event was a real guess, Pat said. He wanted to have enough to give to everyone who showed up.

“That’s the gamble. You don’t know who’s going to show up,” he said. “You don’t want to buy too little and have a crowd.” It would be different if he were doing weekly functions at the post. For an event like this, however, it takes planning so that there’s enough for everyone.

“You need to know how much to buy, and will it keep,” he said. “Everything has an expiration date.”

The hotdogs and hamburgers were free, but sodas, chips and dessert were just a $1 a piece. There was even a donation box in case one wanted to help out a little more.