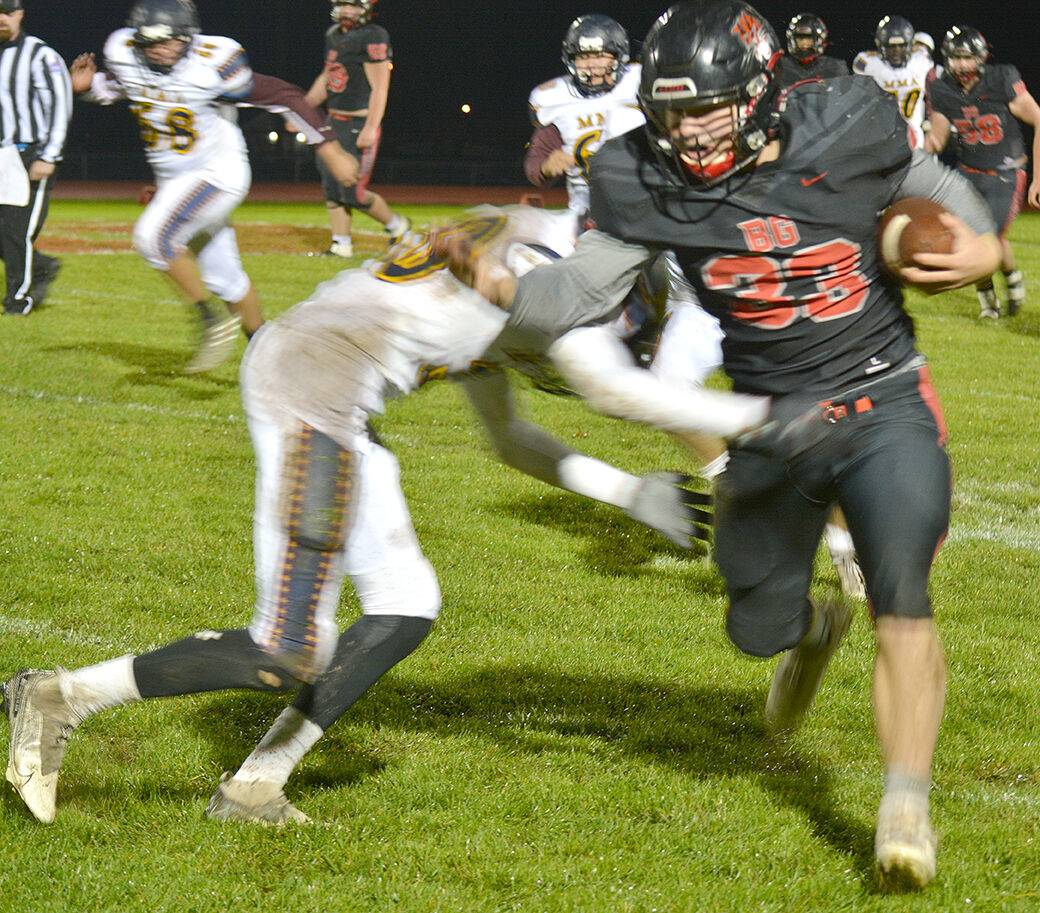 No. 33, Charlie Bowen, breaks another tackle to make major yardage for the Bobcats. Photo by Stan Schwartz 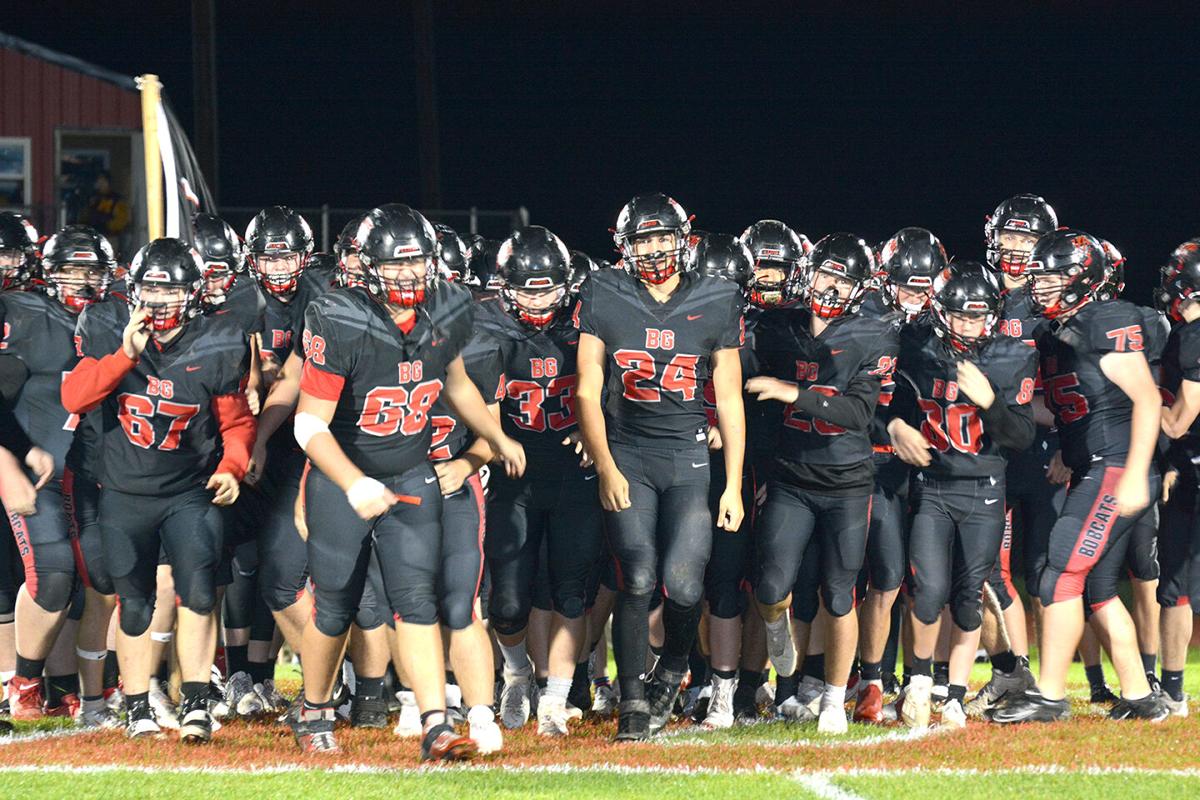 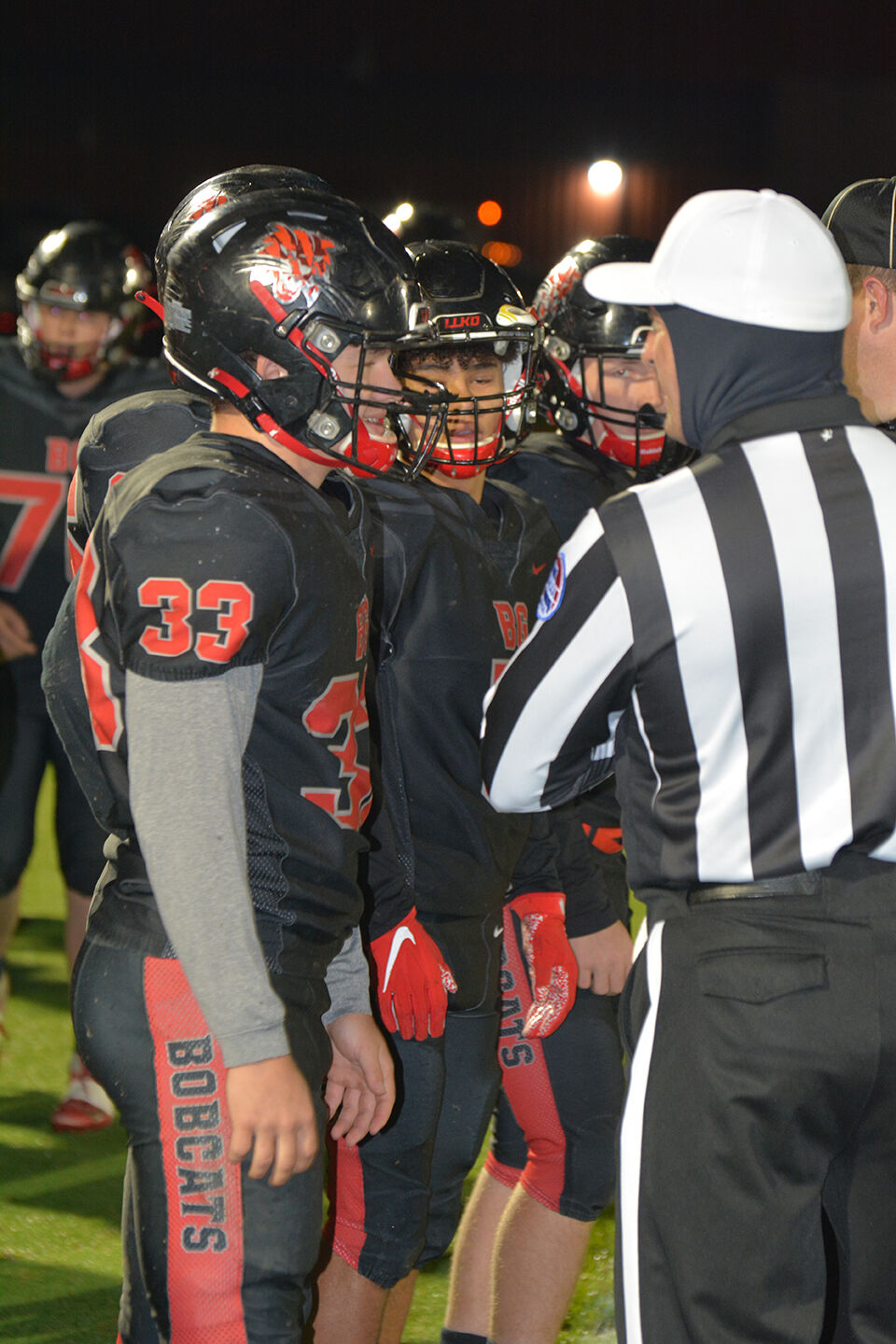 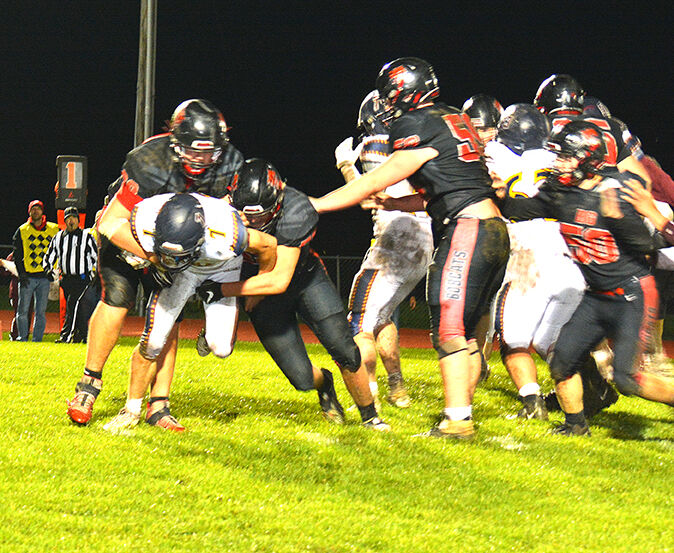 No. 33, Charlie Bowen, breaks another tackle to make major yardage for the Bobcats. Photo by Stan Schwartz

BOWLING GREEN—It was a short game for the Bobcat starters Friday night, but a long game for the Missouri Military Academy Colonels.

With just 9:55 to go in the first quarter, the Bobcats had their first touchdown. The rain-soaked field made traction difficult, but the Bobcat offense still delivered time after time. The 2-point conversion was good, putting the Bobcats up 8-0.

When the Colonels got the ball back, they were in good field position on their own 37-yard line. On first down, the MMA runner was brought down in the backfield. Their passing game was stymied at every turn. Several times the Bobcat defensive line blocked the pass.

The Colonels’ offense could make little headway against an extremely tough Bobcat defense.

After the punt, the Bobcats started their drive at the Colonels’ 46-yard line.

No. 6, Dylan Dalton, went to the air to connect with No. 5, Jordan Miller, on the first down for a big gain. No. 1, Marcus Starks, almost made it into the end zone on the next play, but was forced out of bounds. Two plays later, the Bobcats were in the Colonel end zone. Dalton ran a quarterback keeper across the line for 6, and No. 9, Cooper Kiel, ran in the 2-point conversion, putting the score at 16-0.

On their next series, the Colonels turned over possession on downs, putting the Bobcats in easy striking distance of the MMA goal line. Starks ran two plays back-to-back, setting up another Bowling Green touchdown.

The point after was no good. That put the score at 22-0. With the ball back in their possession, the Colonels started their drive, but it was cut short when a pass was intercepted by No. 50, DJ Feldmann, who ran it back for another Bobcat touchdown, putting the score at 28-0. Kiel ran the ball in for the 2-point conversion, upping the score to 30-0.

On their next possession, MMA fumbled the ball. No. 24, Gunner Bryant, recovered it and sprinted into the MMA end zone for another Bobcat touchdown. The Bobcats attempted to kick the extra point, but MMA blocked it, leaving the score 36-0 with 3:32 to go in the first quarter.

Bowling Green forced a punt on the Colonels next possession and then blocked the kick, giving the Bobcats good field position. In this series of plays, No. 33 Charlie Bowen, ran the ball in for another Bobcat touchdown. The point after was blocked.

With that touchdown, Bowling Green tied the state record for most points scored in a single quarter—42.

After the first quarter ended, with Bowling Green in a commanding lead—42-0—head coach Joe Chinn started pulling his starters out of the game and rotated in players from the bench to give them some game time.

At the end of the second quarter, the Bobcats were ahead 56-0. When the teams came back after halftime, the refs had reduced the last two quarters to just 10 minutes each, and the clock would not stop unless there was an injury on the field or one of the teams called a timeout. With that, things moved quickly toward the inevitable conclusion. Bowing Green’s young players were able to score 14 more points, ending the game 70-0.

“We started getting the younger players in gradually … in the second quarter,” Chinn said. “I was really pleased with our team and how we came out and played our standard of football. All aspects of the game played a major factor in us winning.”

Chinn pointed out the Bobcats’ special teams for an outstanding game.

“Our special teams blocked two punts, we had two defensive touchdowns and our offense had eight rushing TDs. I was really excited for, No. 50, DJ Feldman, as he scored his first varsity touchdown with an INT for a TD.”

He wanted to praise the Missouri Military Academy players and coaching staff for their gamesmanship.

“I also want to give a lot of credit to MMA. There were several teams that were lower seeds that just forfeited their games. So given that they came and played, I have a lot of respect for them for that.

“California is going to be a tough opponent,” he added. “They are coming in with a 7-3 record and have played some tough teams throughout the season. In order for us to move on in the playoffs we have to come ready to go and fire on all cylinders.”

A big plus for Bowling Green, no penalties, while the Colonels were plagued with them throughout the game. It was also a long game for the Bowling Green cheerleaders who were doing jumping jacks after each Bobcat score.

This Friday, the Bobcats host the California Pintos in the semifinals. California is coming off a 35 – 8 win against North Callaway.