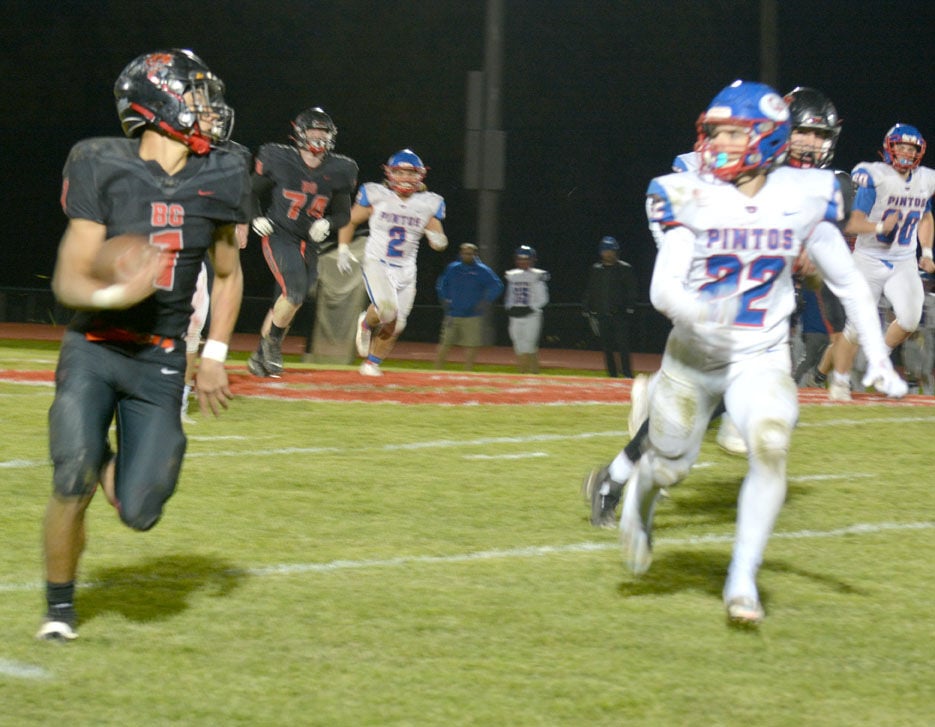 No. 1, Michael Starks, flies past Pinto defenders for another Bowling Green 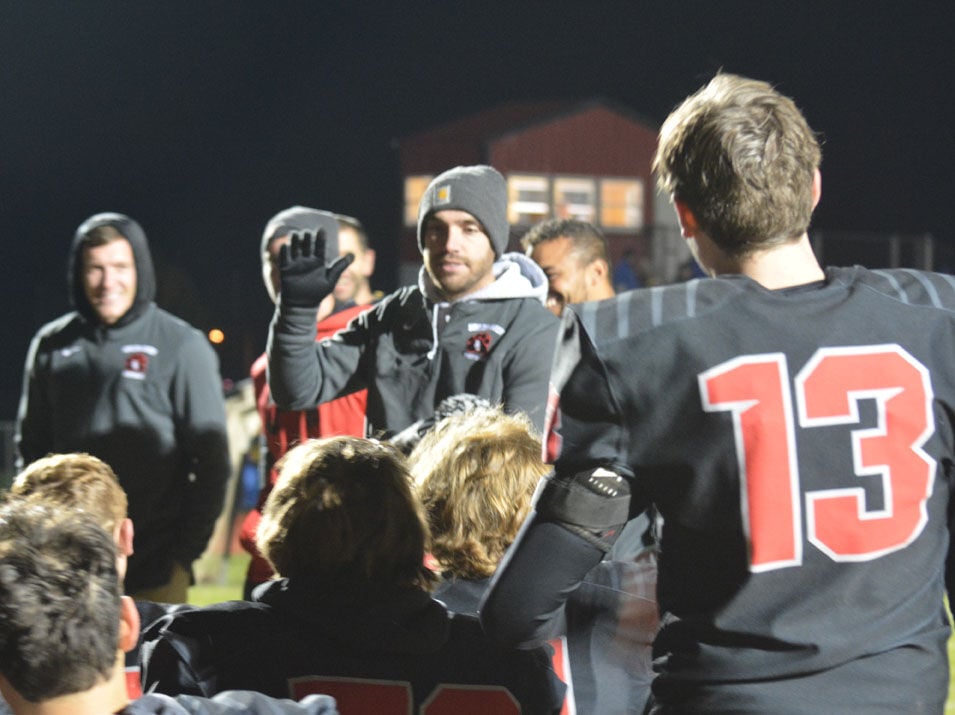 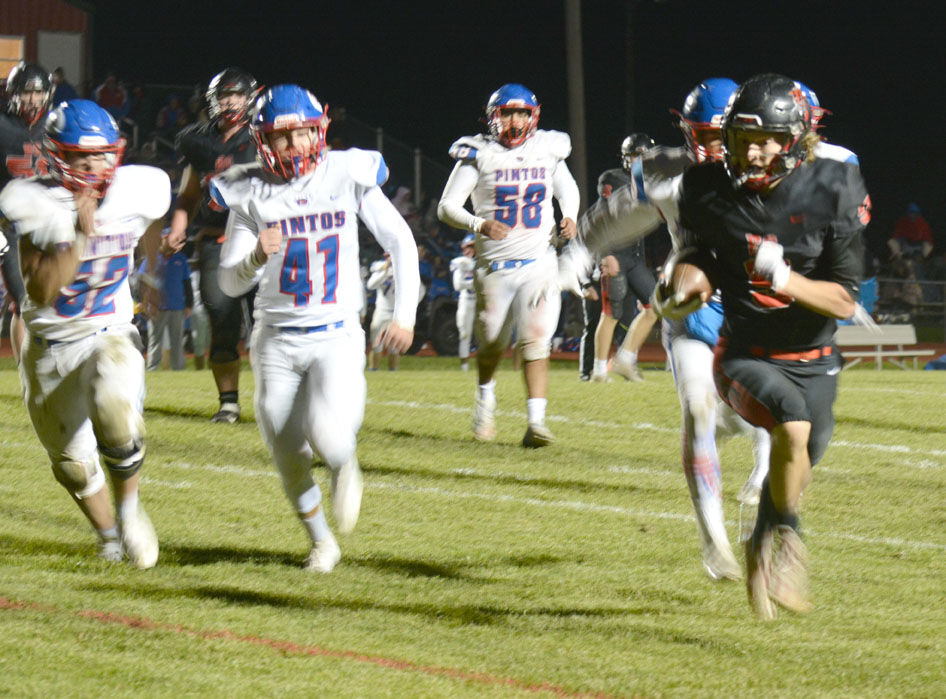 No. 1, Michael Starks, flies past Pinto defenders for another Bowling Green

There was no California dreaming Friday night

BOWLING GREEN—The Bobcats came into the contest against the California Pintos Friday with a record of 9-0, and finished up the night at 10-0 with a decisive semifinal wining score of 65-14.

The Pintos came to Bowling Green with a 7-3 record and left with one more in the loss column, ending their season.

The Pintos won the toss and elected to receive the ball for the opening series of downs. But their possession was short lived. The Bobcat defense didn’t let up the pressure at all, shutting down their running and passing game.

After the kickoff, the Pinto receiver was brought down at his own 35-yard line. By third down they had been pushed back another 7 yards, and were forced to punt.

The ball was placed at the Bowling Green 35-yard line. At first it looked as though the Bobcat offense would be in for a tough game. No. 1, Marcus Starks, just made it back to the line of scrimmage before being stopped by the Pintos’ defensive line. But on the next play, No. 6, Dylan Dalton, connected with No. 24, Gunner Bryant, with a pass down the middle and Bryant carried the ball in for a touchdown.

As soon as Bryant caught the ball, the crowd erupted in a huge cheer that kept going as he crossed the goal line.

The 2-point conversion was stopped, putting the score at 6-0 in Bowling Green’s favor.

Next, the Pintos started their drive at their own 29-yard line. Again their ground and air game proved ineffective against the Bobcat defense. California had to punt the ball away again.

The ball went almost straight up, giving the Bobcats good field position at the 50-yard line. Starks gained 2 yards on his first carry. Dalton gained a few more on a quarterback keeper. With third down and 3 yards to go, Starks broke through the Pinto line and earned another first down. Dalton added six more yards to his stats and then Starks picked up another first down. Like the tide rolling in, the Bobcat were getting closer to the Pinto goal line.

The Pintos were able to hold off the Bobcats on this series. With fourth down and 4 yards to go on the Pinto 15-yard line, Dalton tried to pass, but it was incomplete, turning the ball over on downs. That didn’t last long, however. The Pintos fumbled the ball on their next play and the Bobcats recovered, bringing the Bowling Green offense back on the field. No. 65, Ryan Bowen, was credited with the recovery, putting the Bobcats back on the Pinto 17-yard line.

Two plays later, the Bobcats were on the 1-yard line with a first and goal series. The Bowling Green offense did not hesitate, and Starks ran the ball in for a touchdown on the next play. The 2-point conversion was good, putting the score at 14-0.

Showing what an incredible athlete he is, Starks made an onside kick and was able to recover the ball, too. And just like that, Bowling Green’s offense was back on the field.

It wasn’t long before Dalton handed the ball off to No. 9, Cooper Kiel, who took it in for another Bobcat touchdown. Starks made the 2-point conversion, putting the score at 22-0.

At the players were coming off the field, head coach Joe Chinn told them to keep their foot on the gas.

The Pintos finally started making some progress with their passing game, moving the ball into Bowling Green territory. Chinn called for a timeout to get the defense back on track after a Pinto first down. Again the Pintos fumbled, with the Bobcats recovering. Not wanted to leave anything to chance, on the next play Starks was handed the ball and he blasted through the line and past the Pinto secondary for another Bowling Green touchdown.

The 2-point conversion was good, putting the score at 30-0 with less than 25 seconds to go in the first quarter.

As California tried to get some momentum going, their quarterback was sacked in the backfield by the 6-foot, 3-inch, 230 pound, No. 55, Harrison Hunt. With that play, the first quarter ended.

The Pintos went to the air, getting the ball down to the Bobcat 16-yard line. A running play added a few more yards, but during the next play, the runner was brought down behind the line of scrimmage. A holding penalty pushed them back either farther. A deep pass put the Pinto receiver in the Bobcat end zone with the ball. A field goal was good, putting the score at 30-7. This gave the California team some new life.

Starks brought the kickoff back an additional 25 yards. Just a few plays later, Dalton connected with No. 26, Owen Niemeyer for anther touchdown. The 2-point conversion was good, and that made the score 38-7.

As the Pintos tried to make a comeback, their quarterback was sacked by No. 55, Harrison Hunt, forcing a punt.

With just 7:06 to play in the first half, the Bobcats were starting their drive from their own 10-yard line.

Bowling Green fumbled on second down, but No. 59, Devin Rue, recovered the ball, keeping he drive alive. After another fumble was recovered by the Bobcats, Dalton ran the ball next to pick up a Bowling Green first down burning up the clock.

With another series of plays, the Bobcats scored a touchdown. Another good 2-point conversion put the score at 46-7. That’s how the half ended.

“I was really happy with how fast our kids came out and played, “ said Chinn. “We knew California was going to be good on offense, and to start the game with forcing them to punt was a really good start for us.”

Chinn wanted to compliment how well the Bobcat defense played.

“I was really happy with our defense because they really played well,” he added. “On offense, we took care of business. Rushed for over 400 yards and threw for another 120. Marcus Starks on the year has 1,800 rush yards and 30 TDs. Dylan Dalton on the year has 1,400 total yards (rushing and passing) and 17 TDs. Those guys are doing a great job on offense, but a lot of credit has to be given to our offensive line—Devin Rue, Ryan Bowen, Jackson Chalrton, Seth Huber, Harrison Hunt and Gunner Bryant. They are paving the way for our offensive success!”

Chinn said he was looking forward to this Friday’s game against the Hallsville Indians.

“Hallsville is going to be a really big test for us. They come in ranked third in the state and with an undefeated season. This will be an away game and first district title game for us since 2014.”