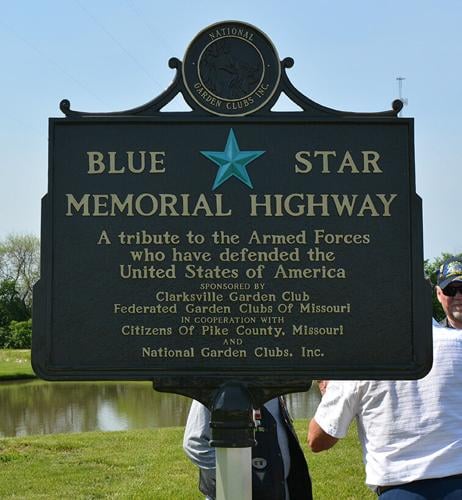 Members of Bowling Green’s Chamber of Commerce along with a representative from the Federated Garden Club and members of the Clarksville Garden Club, as well as riders from the Missouri Honor Guard and veterans from VFW Post 5553 came together on Saturday, May 7, to dedicate the Blue Star Memorial marker, which was placed at the Bowling Green Visitor’s Center.

Mayor Jim Arico thanked all those who came to honor the area’s veterans during the unveiling of the Blue Star Memorial marker. Mel Orf and his crew from Orf Construction placed the marker earlier during the week in preparation of the ribbon cutting ceremony Saturday.

Rep. Chad Perkins brought a House Resolution to thank those who participated in getting the marker placed in Bowling Green.

On hand for the presentation was Federated Garden Club president Joyce Lewis.

“I am happy to be here today to participate in this Blue Star Memorial dedication, along with my fellow Federated Garden Club members. This is an honor and a privilege,” Lewis said.

“The Blue Star marker was started in 1945 and the Name was chosen because during the Second World War, the star on flags displayed in homes and businesses denoted a family member that was serving in the armed forces,” she noted, citing the history of the markers in Missouri.

“Many markers were placed during the ’40s and ’50s. It was determined between the ’80s and ’90s that several markers were missing,” she said. “During 1993-1995 Garden Club National president requested all states restore the Blue Star Program to its original status.

“The only record Missouri had in 1993 was a small, handwritten list of 13 markers. With a great deal of determination and detective work they were found. Some of the unlikely places were ponds, basements and barns. Today they have all been restored to their original condition and put in a place of recognition and honor. The original number of 13 has grown to 70 throughout the state.

“I don’t know of anyone who has given more to their country than those that have served, are serving and now and will serve in the future.

“Thank you very much for your dedication to our country and our freedom. We are proud to be part of an effort of encouragement and recognition of our country’s finest.

“While we go about our daily lives, or while we sleep, the men and women in our armed forces fly our skies, sail our seas and guard our shores, insuring out safety.

“They stand ready at a moment’s notice to defend our country. We must not forget them, and we do not.

“As the lingering note of taps resounds in the distance, we remember.

“And remembering today, we dedicate this Blue Star Marker to honor and glory of all those men and women who have served, are now serving and who will serve in the armed forces of our great nation.

“It is with pride that the National Garden Clubs joins with FGEM to perpetuate our Blue Star Memorial Program with this marker, which stands as a symbol—for all to see, lest we forget those who help to keep us free.”

The members of the VFW performed a gun salute and Don Hamilton played taps.