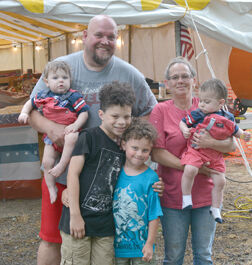 Curtis Peak, back left, stands with his girlfriend, Tina Graver, at his fireworks stand along Rt. 161. Curtis is holding his grandson, Jax Peak. Tina is holding Jace Peak. Standing in front of them are Dante and Tayler. Curtis said these are just some of their grandchildren. Photo by Stan Schwartz 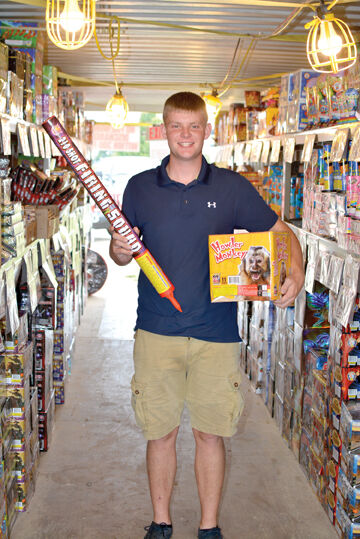 McCoy Thompson stands inside the shipping container that is doubling as his fireworks store for this season. He is operating his new venture under the name TNT Explosives. The store is in the parking area at Prairie’s Edge Garden Center. Photo by Stan Schwartz

Curtis Peak, back left, stands with his girlfriend, Tina Graver, at his fireworks stand along Rt. 161. Curtis is holding his grandson, Jax Peak. Tina is holding Jace Peak. Standing in front of them are Dante and Tayler. Curtis said these are just some of their grandchildren. Photo by Stan Schwartz

McCoy Thompson stands inside the shipping container that is doubling as his fireworks store for this season. He is operating his new venture under the name TNT Explosives. The store is in the parking area at Prairie’s Edge Garden Center. Photo by Stan Schwartz

BOWLING GREEN—As of Thursday morning, sales of fireworks at the two stands near Bowling Green were a bit slow. Curtis Peak, owner of Peak Fireworks, and McCoy Thompson, operating as TNT Explosives, selling for Powder Monkey Inc. said they had seen slower than usual sales since opening on June 20.

They attributed the slow sales to the bad weather which has been constant pretty much all of last week and through the weekend. Peak said the week leading up to the 4th of July should be quite busy for him.

This is the seventh year Peak has set up his stand along Rt. 161 just south of Bowling Green from the four-way intersection.

For him, the business is all about family. Most of his family helps him run the fireworks stand and he’s grooming his son to take over the business some day. Even Peak’s mom sometimes takes a hand in helping out.

Peak had been keeping the sidewalls on his tent down, to keep the inventory dry.

“It’s one of those years where were going to get slammed real fast all at once,” he said. He had spoken with the fire marshal and learned that some stands were having trouble getting all their inventory. Peak, who has been selling fireworks for close to 10 years, said he put his order in early and made sure his distributor gave him everything he asked for.

“I had to work my butt off to get all this,” he said indicating the tent full of fireworks. Normally, he has a red and white tent. This year he went back to the original colors—yellow and white—he had when he first started selling outside of Bowling Green.

The storms have also been a problem for some of the fireworks tents, he added. “Some can’t get them up like they usually do,” he said.

Peak’s girlfriend, Tina Graver was recently diagnosed with thyroid cancer, he said. He was taking donations for her to help offset her medical bills. Those who contribute are entered in a drawing for a family pack of fireworks.

As in past years, to show his appreciation for the community that has kept him in business, Peak said he plans on putting on his annual fireworks show. The City of Bowling Green does not host a July 4th Fireworks display, so Peak’s show becomes the unofficial one for the city. He said he’s hoping for a spectacular show this year.

They also do a nice party for the family and those who help out. They’re even thinking about doing volleyball games and zero-turn lawn mower races.

“We might even put up a family pack of fireworks for the winner of the zero-turn mower race,” Peak said.

This is the first year Thompson has tried his hand at selling fireworks. He had heard about a distributor, Powder Monkey, that had wanted to expand its footprint to this area.

McCoy is not one to let a business opportunity go by without first thinking about the possibilities. He runs or is part owner of a number of businesses in Bowling Green. For an independent business owner, taking on fireworks sales seemed a natural choice.

Currently he’s working as a subcontractor for Powder Monkey, under the name TNT Explosives.

He said he was a little worried when he first saw the shipping container that was placed in the parking area of Prairie’s Edge Garden Center. But once the doors were open, he could see the container became the store, with the inventory lining the sides.

The good thing about it, he noted, is you can lock it up at night and go home. Seasonal fireworks sellers normally have a person stay with the inventory overnight when the stand is closed.

This first year, McCoy said he’s getting a feel for the operation. And next year, he’s hoping to set up his own tent.

“It will be a little more work,” he said, but he’s willing to put in the effort to increase sales.

He noted that the first two days of sales were pretty good. But with the weather being so bad, sales after that slowed down considerably.

“My distributor (Chris Sander) told me not to worry,” he said. “It’s the second week where people will come out.” His signs are visible from Hwy. 61. Once people know he’s there, McCoy said, business should pick up. He added that Sander has four other shipping container stores set up at various locations in the state and one big tent that he operates in St. Charles.