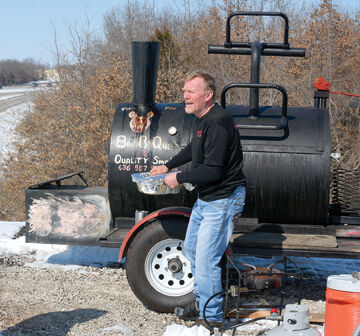 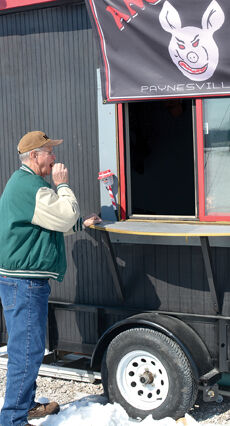 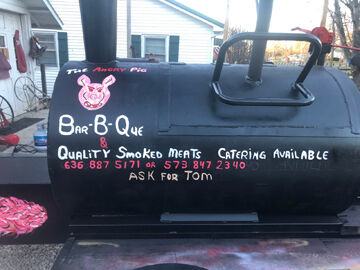 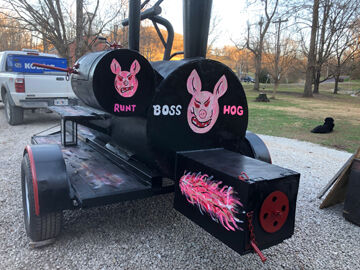 EOLIA—It was like someone rang the dinner bell right a noon on Saturday, because the cars started pulling into the parking area in front of his roadside stand, and the people were lining up to buy The Angry Pig barbecue being served by Tom Leake.

No matter the cold, even though it was a few degrees warmer than most of the previous week’s frigid temperatures, the customers waiting in line were smiling and talking, some to each other, but all of them were waiting for their turn at the window to talk with Leake, and to order their food.

It’s important to Leake to cook the best food possible and price it so people could afford it. He said he wants people to keep coming back for more—and they are.

Before this endeavor, he helped build bridges. But a lifetime of construction work can take its toll on the human body. And when Leake, nearing age 60, decided it was time to retire, his mind was still way too active to park his body on the couch in front of a TV to while away the years.

“I was getting older and a little broken down, so I thought this would be a nice retirement gig,” he said. “But it’s a lot more work than I thought. But I really enjoy it and I enjoy the people,” he added. He’s happy about the way his business has started out. At the window it’s easy to see how much he enjoys seeing the people show up. He always hands them a small piece to try, and seeing their reaction to the taste brings a quick smile to his face. But you have to be looking right at him to catch it because he goes right back to filling the order.

“If somebody hasn’t tried something of mine,” he said, “I’ll give them something to sample. That way, if they don’t like it, they don’t have to buy it.”

About two months ago he started smoking turkeys. Leake noted that a lot of people he spoke with were not much into turkey, but after trying his smoked turkey, they were all-in.

“Now I have people wanting me to do turkey once a week,” he said.

He always liked to barbecue, and for the last two years or so, he had been giving away all that he cooked.

“People would ask me, ‘When are you going to start your own business?’” Leake said. He would tell them, “I’m about to start.”

He attributes his passion for not just cooking, but doing everything the right way, to his mom, Evelyn Leake. She died in 2019. He confided in her that he was concerned about starting the business. “She told me, “Don’t you dare not do this. You’ll do just fine.’”

“I don’t take shortcuts,” he said. “I use lots of different seasonings, and when I have sides I make my own.” Most of the time he’s up all night cooking for the next day’s sales. He posted on his Facebook account on Friday that he was cooking 20 pork butts, which he would be turning into pork steaks and pulled pork. Normally, during the summer, he would slow cooks the meat for 9-12 hours, but in the winter, he increases that time to 16-17 hours. Leake said he likes the meat to be real tender.

He pulls all the pork by hand, he explained. Some chain restaurants have a drill attachment that they use to grind all the meat together. Leake said he prefers to do it by hand because he gets a lot less fat and gristle that way.

“I want to make sure I’m doing everything I possibly can to make it right,” he said. So far, he added, his biggest problem is time—figuring out how long it takes to get everything done the way he wants it done.

“I can’t waste a minute,” he explained about getting it all done to meet his schedule.

He thought about hiring help, but that would mean he would have to pay the other person and then he’d have to raise the price for the food he cooks. And Leake does not want that. He prefers giving people a quality product at a reasonable price, even if he has to work extra long hours to do it.

“I want people to know what they’re getting and then want to come back for more,” he said. “It took me by surprise. I didn’t think it would be like this.” He saw all the people standing out in the frigid temperatures, not complaining and happy to get their food. It’s a social time for him—talking to his customers about their families.

When he first got there, Leake backed his portable barbecue smoker in behind his roadside stand, which sits on the Eolia side of the exit, just off of Hwy 61. He’s tucked in right behind the Caleb Brown real estate office at the intersection of Old Hwy 61 and Green Street. You can’t miss his Angry Pig flag. He was telling his first customer of the day, Tommy Meyer, about driving through town with smoke pouring out of the smoker’s stack.

Even though he says he’s not much of an artist, Leake said he created his own logo about seven years ago, and while admiring his finished work, he couldn’t help but think that, that’s one angry pig. And just like a light switching on, he had the name for his barbecue business. Since then, he’s gotten real good at recreating the logo, and now he’s trademarked The Angry Pig.

Back at the shack window, people are buying the meat by the pound. Leake goes through the trays fast, stopping only to pop back outside and pull some more out of the smoker. He built the smoker himself and painted The Angry Pig logo on its side, along with his phone number, because he also wanted everyone to know that he does catering.

“I’ve done a few weddings,” he said, “and sadly a few funerals.” Even if you’re celebrating the joining of two people or celebrating the life of someone who recently passed, everyone has to eat, and Leake said he wants to provide them the best barbecue possible.

In addition to selling in Eolia, Leake is working to make his house in Paynesville another outlet for his food, so he can split his time between the two sites.

“We’re on the Scenic Byway,” he said about his house, “and in the summertime you would not believe the motorcycles and classic cars that come through here.”

His business is portable to his food permit allows him to go anywhere in the state. As for Pike County, he noted, any town that’s OK with him setting up there, he’ll go.

“That’s all I really want to do,” he said, along with the catering.

His hours operation are not quite regular while he’s still working out the timing, so it’s important for customers like his Angry Pig Facebook page so they can keep track of where he will be and what he’s cooking for the next day. He was running a bit behind on Saturday because cans soda and bottles of dipping sauces he stored in the shack froze and burst. That prompted a lot of cleaning before he was ready to open the sales window at noon.