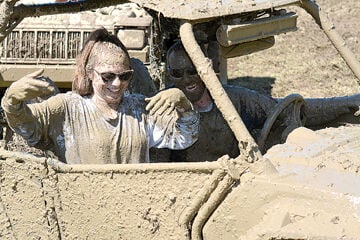 This couple made short work of the mud pit, leaving not 1-inch of vehicle uncovered. Photo by Stan Schwartz 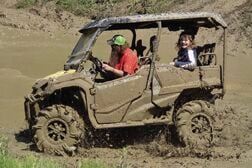 This couple made short work of the mud pit, leaving not 1-inch of vehicle uncovered. Photo by Stan Schwartz

BOWLING GREEN—After years of trying various crops on their farm to earn a decent living, the Burns family decided to create an off-road venue for people to ride their 4x4s, side by sides, and other recreational vehicles.

Their kickoff event started Saturday at 10 a.m. and ran through Monday at 3 p.m. From the number of people who showed up the first day, the Burns family believes they have a hit on their hands.

Dale Riffle, a neighbor of theirs who was helping at one of the entrance gates, said he must have registered close to 1,000 people on Saturday.

Bobby Burns said he had been working since 6 a.m. preparing the area for the customers that would come in. He noted that a few weeks before he had witnessed the number of people who had showed up for the Frankford Side by Side Poker Run and knew there were a lot of people who had spent thousands of dollars on their off-road vehicles, but had few places to ride them.

The week leading up to the event, Bobby said they had a bulldozer going through their 860-acre farm, blazing new trails for the expected crowd.

Robert Burns, the patriarch of the family, said they had tried several different crops on the farm and none of them seemed to do well enough for them to make a good living.

Bobby said that when Pike Off Road starts regular hours, the gates will open at 10 a.m. and they will close at 10:30 p.m. Drivers will have until midnight to clear the trails.

Riffle looked at the rows and rows of trucks with empty trailers that lined the field behind the gate off of Pike 132 and said, “People spend lots of money on them things and they come out here and try to tear them up. I’ve never priced one,” he added, but he knows most of them are pretty expensive.

In addition to the trails, the family also offered primitive camping. No electric or water hookups. But that didn’t stop several large RV’s from pulling in the night before and setup for the next day’s kickoff event.

“All these guys showed up last night,” Bobby said, “except for the ones on the other side of those hay bales.”

It was still pretty wet from earlier rains, but no one got stuck, he added.

“We didn’t have to water the roads down,” he said, but noted that it was getting to the point that they might have to take a water truck out to keep the dust down. He was even considering watering down the county roads, as well.

Robert said they had hoped to get some food trucks to come in, but the owners wanted to know what the turnout would be first before committing to setting up at the venue.

With the popularity of the new venture, Bobby said, they would also try and get sponsors for the events.

“We want Crossroads and Hayden Motor Sports out here,” he said.

If a customer wanted something more challenging than just the trails crisscrossing the farm, the Burns family had also built a mud pit so people could get really dirty.

Several people made the run through the pit, throwing mud high into the air and sometimes disappearing under at shower of the thick muck. Joe Burns said now that they saw how people were handling in the mud pit, he and his brother were going to expand it at some point, so people who own really large off-road vehicles would have a challenge as well.

Robert said he worked as a pipe fitter for many years and sometimes people have to change their ways.

“My dad and I, over the years, have raised oyster mushrooms, snails, ginseng, … trying to find something to make this farm pay,” Robert added. It took some thinking, but then they hit on this idea.

“I’ve got the perfect spot for it,” he said referring to the farm that they converted into an off-road track. They had three entrances set up around the property.

Joe said they had also brought in portable potties and placed them throughout the property.

“A lot of places like this don’t have that,” he added. The female patrons like having them around.

They could probably run the company about 20 weeks out of the year. Robert said they have to be careful in the spring because of the wet weather, and they cannot have off-roaders on the trails during hunting season.

“As things progress,” Robert said, “we’re going to move things further back (on the property). It’s just been too wet to get there. We’ve had to improvise and adapt to get to this point.”

A Pike County Sheriff’s deputy showed up to ask them to make sure the riders stay off the county roads.

Robert said they were doing what they could to inform riders to stay on the property. There were trails they could use to get to all three locations, including the mud pit.