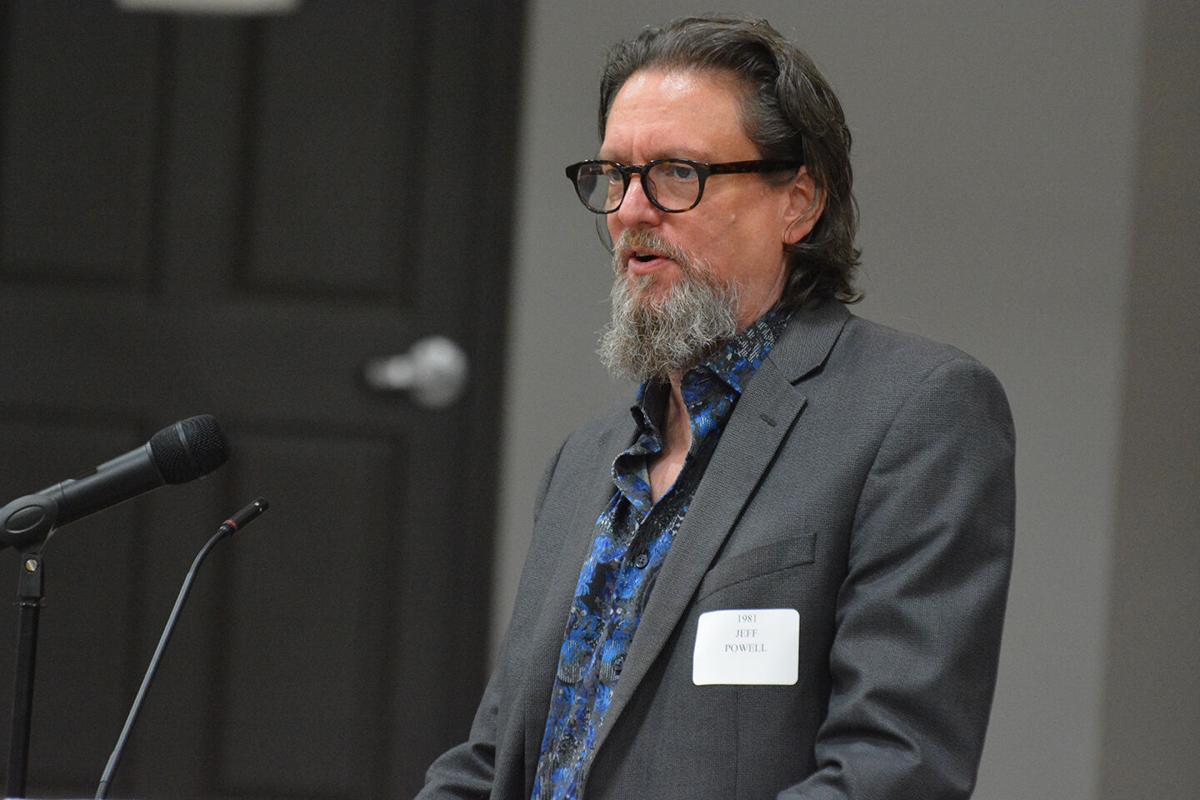 Jeff Powell talked about his time as a recording engineer in Memphis, Tenn. Photo by Stan Schwartz 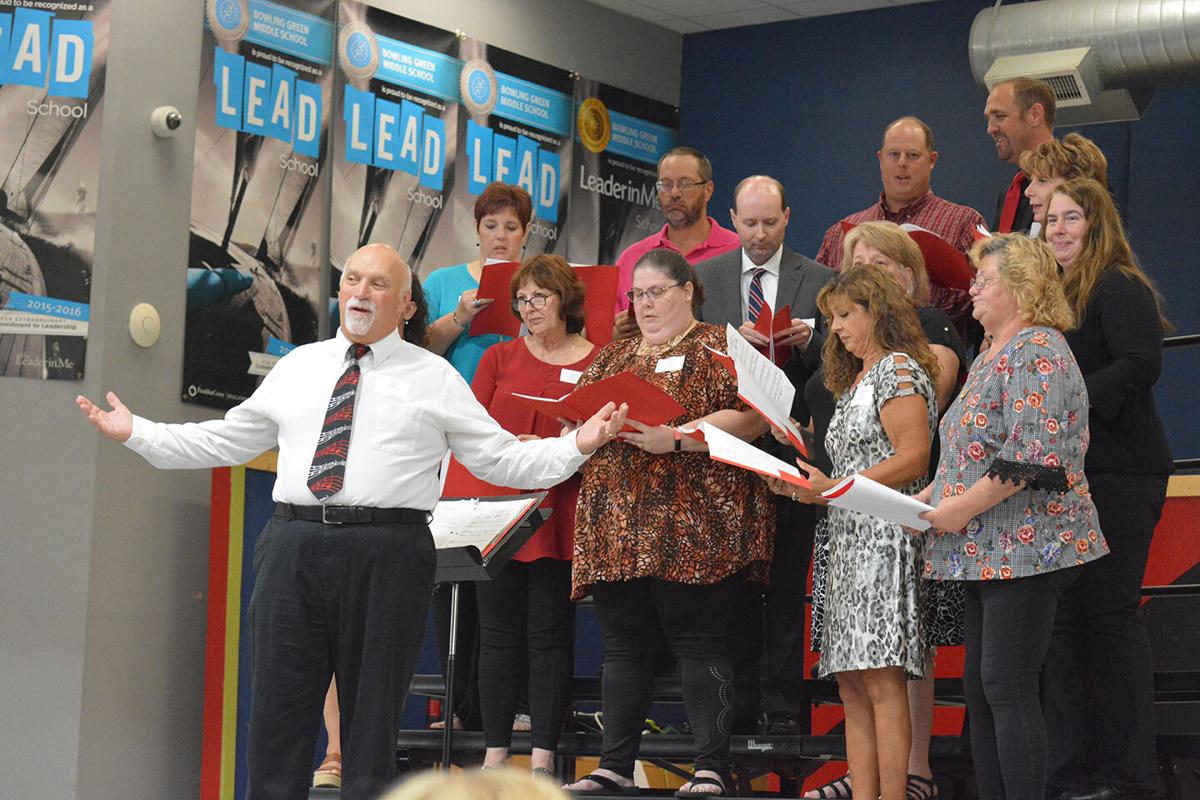 Jeff Powell talked about his time as a recording engineer in Memphis, Tenn. Photo by Stan Schwartz

BOWLING GREEN—Jeff Powell, the keynote speaker for the Bowling Green High School Alumni banquet Saturday, said growing up and attending school here is what shaped him for what he decided to do with his life.

Powell graduated from Bowling Green High School in 1981. He admitted he has some starts and stops with his college education, because life happened, but he eventually achieved his goals and graduated with a degree that made sense for him.

Jeffrey Shaw, Alumni president for last year and this year because the banquet last year had to be canceled because of COVID. He introduced Powell, noting that after leaving Bowling Green, Powell moved to Memphis, Tenn., where he would eventually earn his degree in music from Memphis State University with an emphasis in recording technology.

“Jeff has worked with a great many talented and famous musicians,” he said. “He’s worked on multiple gold and platinum records, and nine different Grammy-winning projects.”

For the last 13 years, Shaw said, Powell has been running his own company—Takeout Vinyl—cutting vinyl records.

Shaw said he knew Powell through Powell’s mother, who had been elementary school music teacher. Shaw added that Jane Powell would talk about Jeff all the time in class.

“She would just brag on him,” Shaw said.

Powell said he was glad to be back in Bowling Green and seeing people he has not seen for ages.

“I felt right at home as soon as I walked in this room,” he said. The banquet was held in the middle school gymnasium. Double the number of classes were being honored Saturday night to make up for last year’s canceled banquet.

Even though both of Powell’s parents have passed away, he said he could still hear the echoes of his dad yelling during basketball games.

“I remember some of his friends giving him the Silver Whistle Award, which he proudly kept on his desk,” Powell said.

He thanked the Alumni Association for all the good work that it does for the students at Bowling Green R-I Schools.

After hearing the treasurer’s report about the money raised for scholarship, Powell said, “That just blows my mind.”

He also thanked all his teachers from his time coming up through the school grades.

“And not just for teaching me and giving me a good education, but for putting up with me,” he explained, “and all my hijinks.”

He mentioned his first- and fifth-grade teachers. One who brought a Jimi Hendrix tape to class to let the students listen while they did homework, and also for reading “The Lord of the Rings” trilogy to them.

“That was something really cool back then,” he said.

He also thanked Jack Bibb, who was his junior high choir teacher. Bibb also led a group of his former students as they performed some of his favorite songs for the night’s entertainment.

“I don’t think any of you knew how much you were influencing me in the music that I was taking with me,” Powell said. “I didn’t know how much it was going to affect my life, and what I was doing.”

Even Powell’s typing teacher, Pam White, got a mention in his tribute to those that taught him.

He said he had no idea why he would need to learn how to type.

“But now,” he added, “it’s in everything that we do with computers and stuff. It’s really a skill that’s come in handy.”

He also wanted to thank White for sitting down with him and filling out his application for college, something he had not done.

“She had me sign it and sent it off. Sure enough, I got accepted there (at the University of Missouri-Columbia).

All the twists and turns he took while working in the music business had its roots in growing up and going to school in Bowling Green, he said.

What drew him to the recording industry, he noted, was when he was a young teen, sneaking out of the house to attend his first rock concert with some friends.

“The acts were Thin Lizzy opening up for Journey,” he said. “It just blew my mind,” he added, “in every way. The sound; the volume of it; the light show.”

Powell and his friends got home safe with his parents none the wiser.

He told himself, whatever had just happened to him during that concert is something he wanted to do for the rest of his life.

He started out with recording studios in Memphis while attending the university.

“It was a great place to get my feet wet,” Powell said.

He got to meet several big stars of the day, such as Stevie Ray Vaughn, Jerry Lee Lewis and Albert King.

“Things were going along really well,” he noted. Even though he wasn’t a recording engineer yet, he was allowed to sit in on some of the sessions, as long as he kept his mouth shut.

“That only made me fall in love with the business more,” he said.

After his father died, Powell said, he could not say enough about the Bowling Green community and how much it supported him, his brothers and his mother.

He stayed back with his mother for a while and eventually returned to Memphis where he started working at one of the biggest recording studios. That’s where he met Susan, who would eventually become his wife.

“About half you came down to Memphis for the wedding,” he said. “It was more like a concert with a wedding thrown in.”

Some of the bands he worked with over the years, he said could fill a book with all the trials and tribulations that went on during the recording sessions.

It was years later, in 2008, Powell said, when he became interested in learning how to cut vinyl records.

“There was a slight comeback going on,” he said. People were becoming nostalgic for their records of old. “So, I went home and got my old record player out. And when I started listening, I was just amazed. There was no comparison in the sound (from vinyl).

It took some time, but he was eventually able to obtain one of the 40 vinyl cutters left in the world and started his own company. All the blood, sweat and effort he put into his career came from what he learned here.

“All that comes from you, the community that brought me up, and I thank you all,” he said.