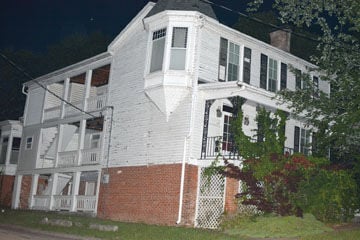 The Hardin House was one of the first stops in the inaugural Ghost Tour of Louisiana. Photo by Stan Schwartz 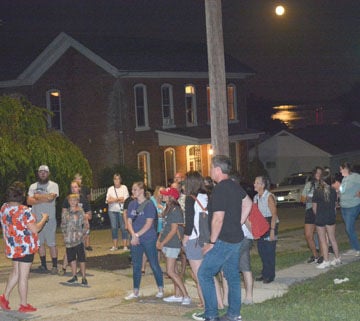 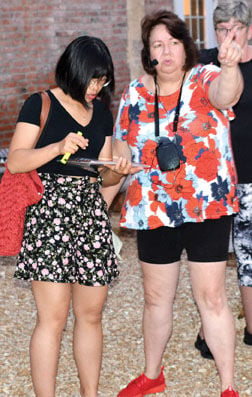 The Hardin House was one of the first stops in the inaugural Ghost Tour of Louisiana. Photo by Stan Schwartz

LOUISIANA—Strange figures at the foot of the bed, lights going on and off, doors opening and closing on their own—these are just a few of things people in Louisiana have witnessed over the years.

And Saturday night, Susan Fregeau led an inaugural walking ghost tour of downtown Louisiana to relate some of those stories as well as the history behind the buildings and homes in the area. She is donating the money raised by the tours to help build a gazebo for one of the city’s parks.

The group met in the patio area of Hop’s Bar & Grill at 8 p.m. From there, about two-dozen people walked just past the main intersection of Hwy. 79 and Georgia Street. There, Fregeau talked about the town’s history and how it had changed over the years, and how some of the citizens from those found years and beyond might still be hanging around. She was being helped on the tour by her son, Nicholas, and his wife Ping Ping.

Susan noted that she was a little nervous on her first tour, mainly because she’s an accountant by trade and not a public speaker. But she warmed to the job as she spoke about the ghost she believes roams the large, Victorian home she bought on Georgia Street. Instead of things going bump in the night interrupting her, Susan had to contend with the traffic on Georgia and 3rd streets in order to be heard. For some reason there are a few drivers who don’t believe their trucks are working unless they can be heard three blocks away. And there are quite a few drivers who think everyone on the street needs to hear the music they’re playing on their car stereo.

She’s traveled the world, and almost everywhere she’s gone, Susan said she attended ghost tours, because of the entertaining history they provide.

Susan thanked her audience for their generous donation. In addition to the Victorian-looking gazebo, the money would also go to projects to “spiff up the town.”

She has been working with Louisiana Mayor Kathy Smith to make Louisiana a tourism destination.

“This town has lost a lot of industry, so we have to look for other ways to bring people in,” she said. “Genealogy is the second largest hobby after gardening,” she explained. When Susan moved to town seven years ago, Betty Allen, a local real estate agent and unofficial town historian, would write up the history of the homes she sold.

Susan had her daughter, Melissa, come in and help her research the homes and buildings in Louisiana. A lot of that information is now posted on the website historic-la-mo.com.

Also, many of the buildings around town are now sporting QR codes on plaques, which when scanned, bring up the history of those buildings on one’s smart phone.

“What we’re trying to do is put the skin back on the bones of the people (of Louisiana). It’s amazing how many interesting people lived here,” she said.

She related some of the unnerving things that have happened in her home since she moved in. Susan said she has come to an understanding with the spirit she believes still walks the halls in her home. She calls her Victoria, because she lives in a Victorian home, and Susan told Victoria she could stay as long as she never showed herself. (To learn what happened in her house, you may want to attend the next ghost tour on Aug. 28. Search for Historic Louisiana Ghost Tour on Facebook for information on how to register for the walk.)

From outside the Mercantile Bank, the group walked up N. Main Street to what Susan called the third most haunted house in Louisiana. By then a full moon had risen over the Mississippi lending a spooky atmosphere to the tour.

Susan talked about some of the strange happenings at the Hardin House, which was built in 1844. From there, the group visited a few more homes going up the bluff, before heading back through town to visit more homes and buildings.

Because this was her first tour, Susan asked for feedback from the audience. One couple thought the introduction to the tour could have been done at the patio before the walking part of the tour started. And the tour went longer than some people were expecting—a little more than 2 hours. Susan said she might alter her itinerary for the next one.

If you do plan on attending the next ghost tour, sign up early. Susan is capping the number of participants at 25. Cost is $25 per person. Also, wear comfortable walking shoes and bring a small flashlight. Some of the streets are not that well lit, and many of the sidewalks—the ones away from Georgia Street—could use a lot of repair.