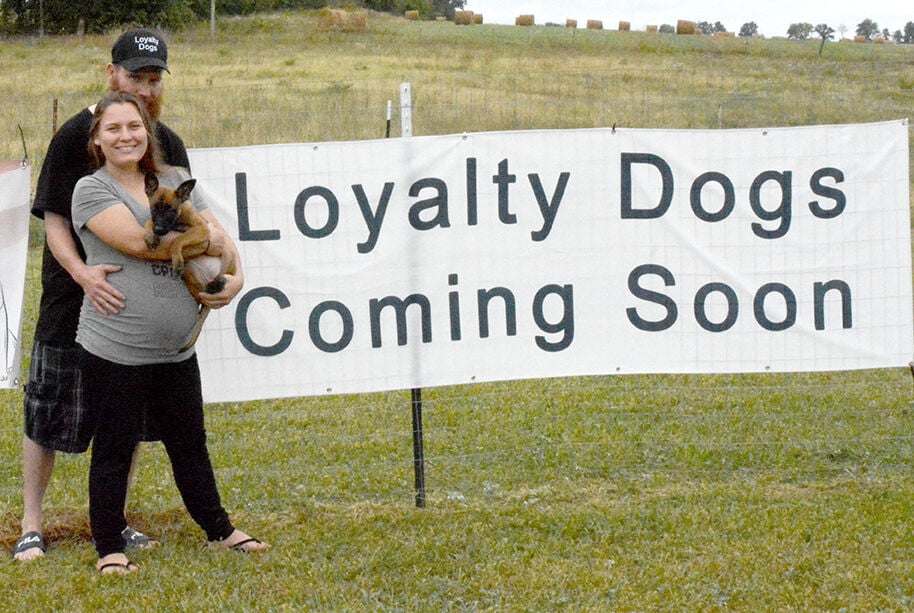 Valerie and John Holingsworth stand in front of the sign for a dog training and breeding business they will be starting early next year. Valerie is holding her service dog, Tiny. Photo by Stan Schwartz 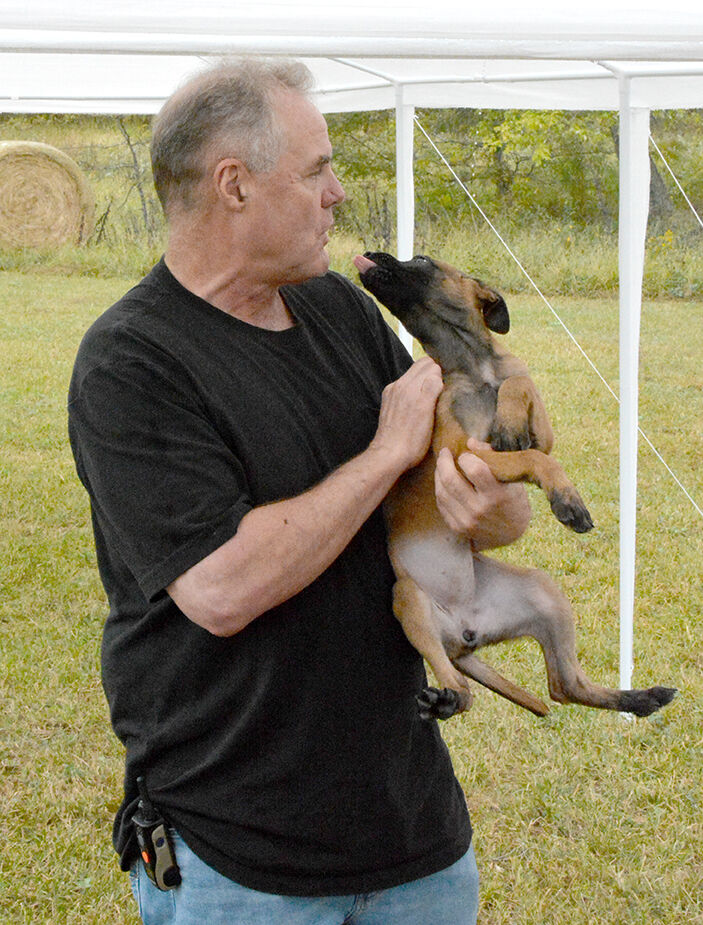 Valerie and John Holingsworth stand in front of the sign for a dog training and breeding business they will be starting early next year. Valerie is holding her service dog, Tiny. Photo by Stan Schwartz

CURRYVILLE—According to Jeff Minder, currently it can take as long as 10 years for a veteran to get a service dog. Saturday, he brought a puppy to Valerie Hollingsworth four months after she enrolled in his dog training school.

Minder, a master dog trainer who built his own school from the ground up, said he came up with a better and faster way to provide service dogs to veterans who need them. He can also train dogs for other activities, as well. And noted, he was able to train the first dog to detect the COVID-19 virus. Valerie, who was a helicopter mechanic for the U.S. Marine Corps, and her husband, John, will be starting a dog training and breeding business early next year on their farm just north of Curryville.

Minder’s approach to dog training involves the person who will be getting the service dog. He noted that people have to be invested in the training for the system to work. Valerie has been working online learning how to train her dog.

She said it was important that veterans who get one of these dogs learn how to train them. That way, if they ever need another dog, they can train a new one right away.

“They have to have some skin in the game,” Minder said while setting up for his demonstration on the Hollingsworth’s farm. He also teaches the business side of his dog training company, which is part of why—in addition to bringing Valerie her service dog—Minder was there on Saturday. Valerie and John’s new business is called Loyalty Dogs. They’ve already done extensive work on the farm to create the training facility, complete with a dog obstacle course.

Minder owns and operates Top Tier K9 in Madison, Fla. He says he trains the dogs and the people.

“Ever since Oliver North interviewed me on his Hero’s Network,” Minder said, “interest in the dogs for disabled veterans has skyrocketed.”

Minder was in the U.S. Army for 11 years. He was airborne and taught the SEAR schools for years, but a parachuting accident forced him to retired from the service.

Having service dog, he said, is what saved him. From that point forward, all his efforts went into creating a business where he could help his fellow veterans.

Minder wanted the public to know that he trains service dogs that can also protect. A former Marine in South Carolina recently bought one the dogs.

“He lost both legs and an arm in Afghanistan and hand on the other arm, so his service dog can also protect him,” Minder said. “That way if somebody breaks into his place, the dog can protect him. It allows that veteran to be able to sleep knowing the dog has his back.” That helps prevent veterans from self-medicating with alcohol or drugs just so they can sleep.

He trains service, therapy and emotional support dogs. In addition to breeding the dogs he trains, Minder does what he calls foundation training. From age 6 weeks to 24 weeks, the puppies are trained on about 40 specific elements from four functional areas to prepare them for service to the disabled or use by the military and law enforcement. They can even be used for executive protection.

He keeps several dogs on hand at his facility until they’re needed, then he matches them with the right owner and finishes the training they need for that particular owner’s needs.

A charity—Forgotten Coast K9—pays about 50% of the cost for the dog.

“The veteran pays about 25 percent of the cost,” Minder said. Something as important as a service dog, he noted, should not be given away.

“They have to earn it,” he said. “Then I match all of that through Top Tier K9.”

He said Valerie got an 8-week old puppy, which she named Tiny, and Minder is teaching her how to train the dog.

“In 12 years down the road when the dog dies, she’s able to train a replacement instead of trying to find another one,” he said.

Also, by teaching Valerie and John how to start and run their own dog training business they can make a living on the side, Minder explained.

“We are the No. 1 working dog training school in the country now,” Minder said.

Minder had Valerie bring out her puppy, Tiny, for a demonstration. He breeds Belgian Malinois, but he can work with most breeds. He wanted to show those who came out for the demonstration how the initial training works with the dog’s basic instincts, which becomes the foundation on which they build a completely trained dog.

Valerie said her family has owed the farm where she and John live since the 1950s.

“What got me about the program,” Valerie said, “is when Jeff’s original service dog died and …”

“I didn’t know how to replace it,” Minder said.

“And that can be devastating,” Valerie added. And through the Veterans Administration the waiting list for a service dog can be up to 10 years.

“This way,” Valerie explained, “(the veteran) can just train the next one. That’s my favorite part of (this program).”

Minder noted that the government is trying to do something, but funding for a service dog program is only temporary. He said there’s only enough money for 1,000 dogs and there are potentially more than 100,000 veterans who need service dogs now.

Once he was done showing what Valerie’s puppy could do, Minder brought out Huey, his service dog. He ran Huey through a number of exercises including a bite exercise to show that he was also trained for protection. He also ran Hughey through the obstacle course so the audience could experience the dog’s agility and response to commands.

Minder said it’s taken seven years for him to build his business to where it is today. He added that veterans need hope, and this type of program can give them that hope.

The best way to get these dogs to veterans who need them, he added, is to donate to the Lost Coast K9 charity. As the donations build, more veterans can receive service dogs.