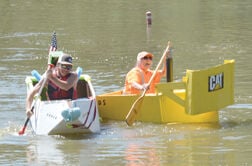 Brenda Pitzer, right, bounces the AquaDozer off of the Booby Trapper, being piloted by Cody Grimsley during the Two Rivers Marina’s 2nd Annual Cardboard Boat Race. Photo by Stan Schwartz 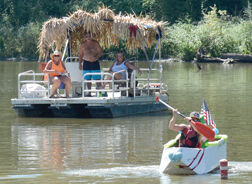 Brenda Pitzer, right, bounces the AquaDozer off of the Booby Trapper, being piloted by Cody Grimsley during the Two Rivers Marina’s 2nd Annual Cardboard Boat Race. Photo by Stan Schwartz

It was the unmistakable sound of duct tape being peeled off the roll and then torn off that signaled the upgrade phase for the competitors in this year’s cardboard boat race at Two Rivers Marina, just across the river from Louisiana on Sunday.

The competitors were hastily patching their cardboard boats and adding some decorative touches in anticipation of being launched into the marina’s tepid water.

Cindy Blaylock, one of the co-owners of the marina, said they had been sweating the weather all week long. She, along with Sherry Moses, Chris Sitton and their father, John Sitton, bought the marina just a few years ago and wanted to bring back the cardboard boat race tradition. Last year was the first time they initiated the race.

She said they also host a variety of events for those who rent a boat slip or who are staying in marina’s campground. Saturday evening they hosted a Newlywed game and a not-so-newlywed game.

“This one couple had been blissfully married for 44 years. One question we asked, ‘What was your biggest fight about?’ Blaylock said. “And this couple started to argue about what that was about. They had fun with it.”

Blaylock and her family have been making a lot of upgrades to the marina, refloating and adding more docks.

The first to arrive was Brenda Pitzer. She was waiting on her husband to help her unload the boat, the AquaDozer. It came with a detachable bulldozer blade. She said the boat was originally built by someone else and donated for her 10-year-old grandson, Xander, but he was not going to be able to make it to the race because of illness.

“I’m a last minute stand-in,” Pitzer said. She was unsure about a boat built for a 10-year old being able to carry her through the race. “I’ll probably be the first one to sink,” she added. “At least I’ll be the first at something.”

This year, there was not as much wind as last year. The announcer boat, the Captain Crunch, was moving into place, as well as the Tiki Toon, the safety boat. Gary Orf was doing the announcing.

The two biggest rules for the race: All boats must be made of cardboard and all contestants must wear life jackets. Other than those two, it was almost anything goes.

Facing off against Pitzer was a contestant from last year, Cody Grimsley in the good ship Booby Catcher. It was built by Rob Gates and Brian Koeller. When they pulled it out of their trailer, they immediately started taping various areas of the boat.

Then it was time: the two teams carried their boats down the ramp and placed them in the water. At the signal, each was given a huge push off the shore. Right from the start, Pitzer was in trouble. The large dozer blade on the front made it difficult to paddle. And Grimsley was in it to win it. He churned the water with his paddle, driving toward the pylon out in the middle of the protected marina cove.

Pitzer was still about half-way to the pylon when Grimsley was on his way back. At the urging of those on shore, she brought the AquaDozer to ramming speed and aimed it at her competitor. The impact did little to change the race’s outcome.

But once Pitzer was able to limp back to shore, she readily agreed to a rematch if they could switch boats. They did, and Grimsley found himself in the same predicament as Pitzer. Eventually, he tore off the dozer blade and charged for shore. But it was too late. Pitzer had already made it across the finish line. It was the boat’s design that made the difference.

The boat race was just a small part of the marina’s Labor Day weekend celebration.