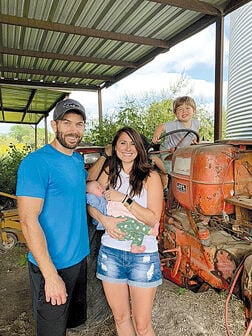 John Logan, left, stands with his wife, Kristen, and their two children, William, on the tractor, and Elizabeth in Kristen’s arms. All photos submitted

John Logan, left, stands with his wife, Kristen, and their two children, William, on the tractor, and Elizabeth in Kristen’s arms. All photos submitted

Louisiana native has a passion for making cider

Growing up, John Logan worked around the family nursery and orchards in the Louisiana area. He’s always been fascinated by how apple trees are grafted and how different varieties of the fruit are perpetuated by this process.

Even in college he was making his own wine, and then started experimenting with fermenting cider from the days of old, when orchards were big and apple harvests were plentiful along the Mississippi River in the Louisiana and Clarksville areas.

He lives with his wife, Kristen, in the St. Louis area, and recently got his commercial cider-making license, setting up a small-batch cidery in the O’Fallon area. Logan’s family still lives in Louisiana and they sometimes help out, but for the most part, it’s John playing jack of all trades.

“We love to escape on the weekends to Louisiana,” he said. His mom and dad, Clay and Sally Logan, and aunt and uncle, Cindy and Walter Logan, live there.

“My parents still live up on the bluff overlooking the river,” he added. “It’s fun to entertain friends and sit out on the patio with a glass of wine or cider, take in the view, and just relax.”

John still maintains an orchard, he noted, where he grafts and grows his own apple trees specifically for cider. This enables him to control which varieties he uses, experiment with new varieties, and take advantage of the local terroir. All of the apples, and most of the other ingredients, are locally sourced, he said.

“Being in the cider industry,” he explained, “it’s fun to have the opportunity to educate folks on Missouri’s rich growing history and apple heritage.” He noted that the Red Delicious and Golden Delicious apple varieties were first propagated here. At one time, Missouri was one of the top three apple growing states, he added.

“A lot of it (the apple industry) started here,” Logan said.

He grew up in the industry. His father and grandfather, as well as his uncle, were all part of the apple growing and nursery business. John is the seventh generation of his family to grow apples and work in the apple business.

“I have so many fond memories, running around the nursery and going up to the test orchard to pick apples,” he said. His first job was watering plants. “A lot of people can’t believe I started out as the water boy!” But, as monotonous and mind numbing as the task was, it presented him the opportunity to study and memorize different plant nomenclature and varieties.

All of that was larger than life for Logan. When he went off to college, he said, he started making wine in his room. For formal parties, he and two fraternity brothers would make fruit wine for the ladies; what he called country wine.

“I just stuck with it after college,” he added. “I fell in love with the whole process.” From an early age, Logan said he had been intrigued by Luther Burbank’s research in discovering new varieties. Burbank was a prodigious plant breeder from the late 1800s to the early 1900s.

“Plant propagation and experimentation,” Logan said, “is what Burbank was all about.” Logan said he enjoys following the whole process, from grafting and growing, to experimentation and innovation, and other wine and cidermaking techniques.

“I became fascinated by the whole process – from graft to craft,” he said.

After college, Logan said he started where most great businesses do, at home in the kitchen.

“It grew to the basement, then to the garage,” he added. “Pretty soon it took over the whole house, which also put him in the dog house,” he joked. This hobby, quickly turned passion, took Logan to Cornell, Oregon State, and Washington State Universities where he pursued courses in cidermaking and pomology.

So many of his friends, he noted, enjoyed what he was making, but because he didn’t have a license, Logan could not sell it. His dream was to have a winery where he would just focus on apple wine.

“But when you go to the grocery store now, the market is saturated with large commercial syrupy, sweet ciders that are mostly made with apple juice concentrate, water, and sugar,” he said. “I wanted to focus on only using local apples, always 100% juice (never concentrate), and featuring the natural character of the fruit, fermenting special blends and single varietal ciders more like wine.”

He explained that the colonists and early settlers of this region fermented cider because water was unclean, as it did not go through the filtering process that it does today. John Chapman, better known as Johnny Appleseed, traveled west from the East Coast, planning apple trees along the way so that settlers could have plots of land with orchards already started and they could start fermenting cider as they established their settlements.

“And during prohibition,” Logan said, “many of the cider trees were burned.” The art of fermenting cider fell off, but now there has been a return to those early days of making cider.

“What I like about the cider business, is it has combined all my previous experiences,” Logan said. “It’s a family business. My wife is involved, and my kids help out.” Of course the kids, Elizabeth and William, are only 1 and 3 years old, he noted, but they sure do eat a lot of apples.

Even though it’s a lot of work, Logan said he truly enjoys what he’s doing. Had he been born in a previous century, more than likely he would have followed in Chapman’s footsteps to the west, planting apple orchards as he went, or conducting plant propagation and experimentation, like Burbank.

Getting his commercial license to produce and sell cider could be viewed as a modern alternative to Chapman or Burbank. And now Logan is in the process of distributing his cider.

“We have our core four ciders,” he said. A dry cider, a semi-dry cider, harvest peach, and what he calls mighty current. “It’s a cider fermented with fresh black currants and dark cherries,” he explained. “We’re releasing that later this fall.” They also ferment some specialty ciders, single varietals, and barrel-aged ciders.

“Right now, we’re self-distributing,” he said, mostly to mom-and-pop wine shops, bottle shops, and retailers. “We’re focused on the local markets,” Logan added, here in the St. Louis area. “We are planning on selling in a few places in Pike County, too.” They completed their first canning run earlier this spring, even though they founded the company in 2016. Commercial production is in full swing in their leased space in O’Fallon.

If a local shop wants to start selling Black Bear Cider, Logan said, contact him through the website at https://www.blackbearciderco.com, or through social media.

And now that COVID restrictions are starting to ease up, Logan said he is resuming plans to open a tasting room. In the meantime, he wants to get back to attending some area festivals.

“We try to take every opportunity to promote Pike County and would be interested in attending the local festivals, such as Applefest and Colorfest,” he said. Colorfest is Louisiana’s big fall festival, and Applefest is Clarksville’s big festival.

His love of the entire grafting, growing, and cidermaking processes continues to progress. Logan said he continues to experiment with making cider at home, working toward achieving his dream, and carrying on the time-honored tradition for the next generation.