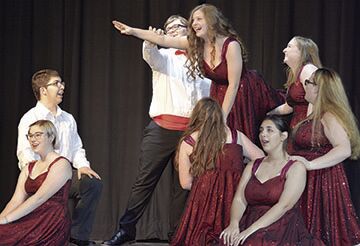 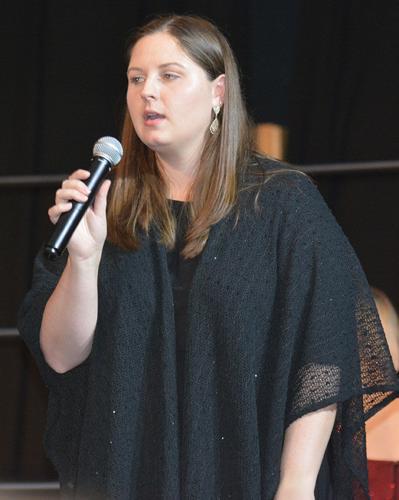 The choirs were directed by Rachel Buttram, and she was assisted by Zachary Keller. Playing the piano for the performances was Marcia Tepen.

The middle school select choir led off the evening’s entertainment with three songs, then the mixed choirs sang three more tunes, before the combined choirs finished their program with some Christmas carol favorites.

It was during this program that audience member’s phones started getting alerts of possible bad weather approaching the eastern part of the state. The brunt of those storms struck much farther south and east of Bowling Green.

During the break between the middle school and the high school choirs, Principal Scott Mullen let the audience know that they were welcome to use the school’s administrative offices or the building’s restrooms if they were worried about the weather. He also noted that two years ago during one of the basketball games, many people sheltered in the auditorium where they were now sitting.

The high school program started off with the Show Choir. Buttram said they decided to change the group’s name after consulting with the school boar, school administrators and the students.

“We came up with a new name,” she said, “which is the combination of a musical term—chromatic—and of course, Bobcats. So, they are now called the ChromatiCATS.”

The group came out and performed a mix of well-choreographed tunes and Christmas carols.

Next up was the mixed choir, which started off with the school’s fight song and then performed some contemporary songs as well as some vibrant Christmas tunes. Finishing out the program was the Concert Choir.

Because of the pandemic, Buttram said, this is the first time some of the students have had a chance to perform on stage for an audience.

“So, we’ve been working a lot on working with technique,” she said.

They were also selling DVDs and collecting donations. Normally, she added, they would charge for such a concert, but Buttram said she didn’t feel comfortable doing that. Instead, they had a donation box out from and passed around buckets if anyone wanted to make a donation.

“That money goes to our music boosters,” she said. “And what the money is used for is for things like these fabulous new dresses,” she added pointing out the dresses the young women in the ChromatiCats were wearing.

“In the past,” she added, “they’ve had to buy their own dresses.” In her memory, this is the first time they have not had to buy them. They money is also used to buy food whenever the choirs go on trips.

“We also use it for the band competitions,” she added. The band will be performing Thursday, Dec. 16.

Donations, she noted, were used to buy a new trailer for the band.

“That money is used for all sorts of things,” Buttram said.