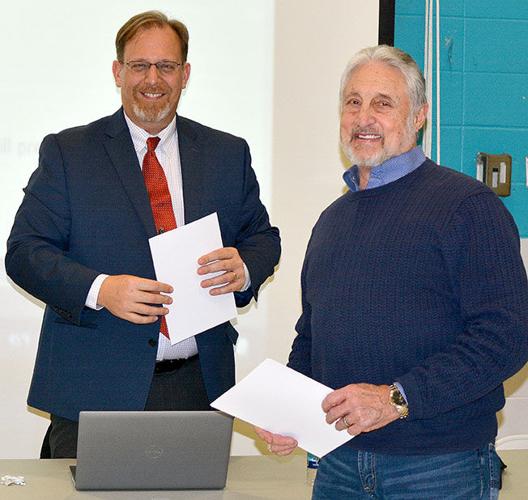 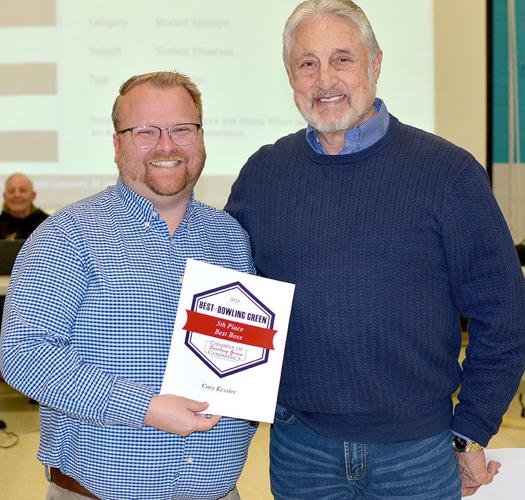 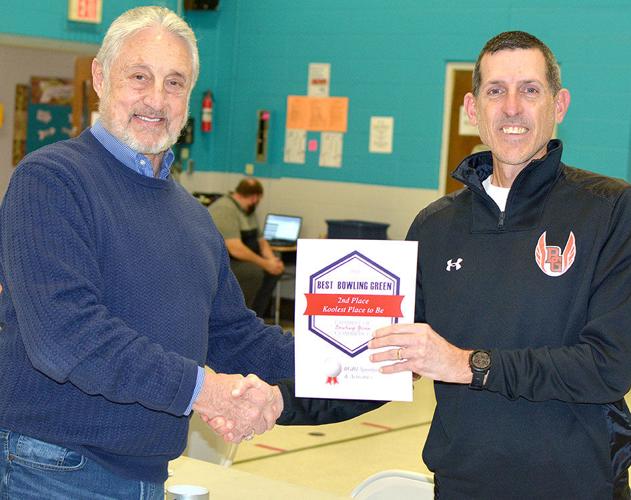 Certificates and mugs presented during school board meeting

FRANKFORD—Plans to build new entrances to Bowling Green High School and Frankford Elementary were outlined during the School Board meeting Tuesday, Jan. 18.

But before that could happen, Bowling Green Mayor Jim Arico presented plaques to teachers and the school board for winning Best Place to Work, first place and Best Customer Service, fifth place.

“These are on behalf of the Chamber of Commerce,” Arico said about the awards. “We have over 175 members, and that’s not all the businesses in Bowling Green. There was a lot of voting and in this category, and fifth place best boss award goes to Cory Kessler. Fourth place best boss, goes to Matthew Frederickson. The top three of each category receives a coffee mug along with the plaque,” he added. “And in the Koolest Place to Be category, BGR-I Sporting Events and Activities won second place.”

Two Frankford Elementary students Brock Chance and Ahlana Wilson read their essays for the school board.

From there, Frederickson spoke about the new metrics the school system uses to show performance standards. The process he said should be ready sometime this spring, so it could be put to use for the next school year.

Frederickson noted that the Missouri Legislature is back in session and already there have been 120 bills submitted. At least 80 of them touch on academics, he said. He plans to travel to Columbia to speak with lawmakers about

Athletics Director Matt Chance said MSHSAA approved last year that schools could start sixth grade athletics beginning in 2022-2023. He worked on the pros and cons of starting that in BGR-I schools.

He said that he asked around, and he didn’t believe any school system of Bowling Green’s size that would start such a program.

“The pro,” he said, “schools could start their programs a year early. But the cons definitely outweigh the pros.”

Chance said brought this up primarily so that the school board would know that other school systems might start a program and the members could be approached by parents wanting to know why Bowling Green is not starting such a program.

Frederickson said that because of the construction that would be taking place at Frankford Elementary School during the summer, they were considering moving all summer school classes to the Bowling Green buildings. Construction on a new storm shelter is slated to begin this spring.

He wanted to get input from the school administrators about making such a move and what it would take to provide transportation for the Frankford students to attend summer school in Bowling Green.

They were going to offer the Summer Journey Program to elementary school students, he noted, and thought it would benefit all the classes.

Kessler said teachers who used the program last summer thought it was great.

All the supplies came in on one palate, he said, which drastically cut down on the supplies that teachers pay for out of their own pockets.

“They provide you absolutely everything you need to do the lessons,” he said, except for some consumable things, such as flour. “It lays out the lessons and provides all the resources,” he noted.

Board member Bob Kirkpatrick said it was important to let the Frankford parents know that combining the classes would only be because of the construction taking place over the summer. The playground would not be available for use, forcing students to stay indoors if they held classes in Frankford.

In addition to the new storm shelter, which would also add classrooms to Frankford’s footprint, a new entrance is also in the works.

People may already have noticed where a new entrance along Bus. 61 would be going in. Other schools noted the difficultly with finding the entrance to Bowling

Green High School when they attended athletic events at the school.

The new entrance would provide a direct route to the high school parking area, crossing behind where the baseball and softball fields are located. Plans show the road crossing the creek that flows through that area.

Frederickson said that even with all the capital improvements recently made to the school campus, they were able to come up with balanced budget for the coming fiscal year.