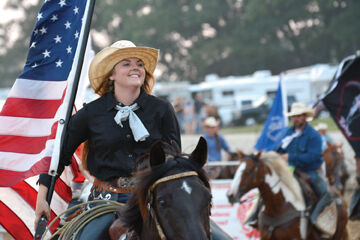 The rodeo was a favorite of the crowd. Here at the start of the competition, the riders performed a parade of flags. Photo by Stan Schwartz 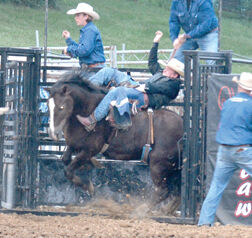 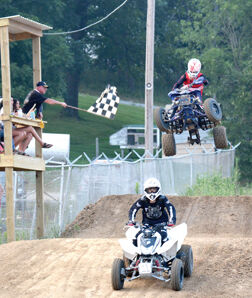 The rodeo was a favorite of the crowd. Here at the start of the competition, the riders performed a parade of flags. Photo by Stan Schwartz

The heat and humidity got breezed away on the last day

BOWLING GREEN—The week started out strong and ended on a country note for the 2021 Pike County Fair. Estimates show as many as 4,000 people a day made their way through the fair gates.

Pike County Fair Board President Don St. Clair said he was pleased with the overall results of the fair.

“We still have to do the math,” he said, on the number of people who attended the fair, but overall, he noted the numbers looked good. If the weather had been a little better on Thursday and Saturday, he added, the numbers would have been much better.

Late Thursday afternoon, as people made their way on the grounds in preparation for the second installment of the truck and tractor pulls, the sky opened up and the crowds were deluged with heavy rain. It didn’t last long, possibly 45 minutes, but there was so much rain in that short time and lots of lightning that the fair officials decided to cancel the evening’s outdoor events. The Western Speed Horse Show was also stopped because of the foul weather.

Even though the rain held off on Saturday, the skies were overcast and temperatures dropped considerably from the previous days of high heat and humidity. People broke out their sweatshirts and long sleeves for the cooler temperatures as the sun dipped below the horizon.

“People come and go throughout the day,” he explained, “so it’s kind of hard to tell (how many people were there) until you do the math (on the number of tickets sold throughout the week).”

St. Clair estimated about 1,200 people showed up for the Saturday evening concerts.

“The demolition derby was crazy, as usual,” he added. “But that’s what you want with a derby. We’re expecting as big a gate as last year, and we had a huge gate last year.” And in 2020, the estimate of crowd size was at about 4,000 people a day.

“That’s a lot of people on our fairgrounds,” he said.