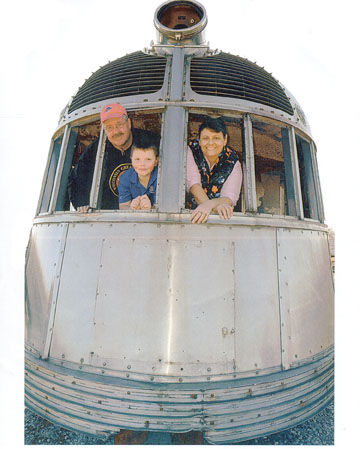 Shortly after the train was delivered to Wisconsin, the owners—Greg, his wife, Mardell, and their son, Alexander Vreeland got a chance to tour the Zephyr. Submitted photo 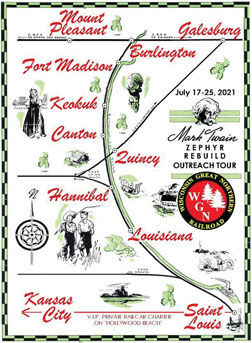 Shortly after the train was delivered to Wisconsin, the owners—Greg, his wife, Mardell, and their son, Alexander Vreeland got a chance to tour the Zephyr. Submitted photo

LOUISIANA—The sleek, stainless steel train rolled into service on Oct. 25, 1935. Between then and 1958, the Mark Twain Zephyr made its way from Burlington, Iowa to St. Louis on its normal route.

Once it was taken out of service, the train set would languish, slowly deteriorating until it was just a shell. It went through several owners, each wanting to restore the Zephyr to its former glory. But it wasn’t until the Wisconsin Great Northern Railroad bought the cars and had them taken to Northwest Wisconsin that the refurbishing work that needed to be done was actually started.

Robert Tabern was hired as director of passenger development, and he and his wife, Kandace, set about researching the history of the train. Along with John Kelly and Dave Lotz, they produced a two-volume set that covers the train’s history and restoration. A third volume is in the works that will show the Mark Twain Zephyr’s rebirth after the restoration is completed. And you might be able to contribute to that third volume.

Starting this week, Tabern will be visiting towns along the train’s route, to talk about its history and show video and photos of the restoration process, which has been taking place for the past 11 months. He is also interested in meeting and interviewing people who have memories of either working on or riding on the train when it was still in service. He believes this is an important part of preserving the legacy of the Zephyr. To reach Tabern, send an email to rtabern@spoonertrainride.com.

The tour starts in Galesburg, Ill.,  on July 17, and runs to St. Louis. Tabern will be in Louisiana on July 21, for his presentation at the Louisiana Public Library at 11 a.m. He will also be selling and signing his books during the tour.

“The train is interesting in itself, but it’s the people who really make it interesting,” he said.

Tabern had been working for a travel company in Milwaukee, Wis., in 2019. He knew the owner of the Wisconsin Great Northern Railroad—Greg Vreeland—through their interactions at train events. Tabern learned that Vreeland was buying the Mark Twain Zephyr and wanted to restore it, but had actually hired Tabern to market another aspect of the company.

Tabern was incredulous, because he had seen what the train looked like when it was languishing at a train depot outside of St. Louis not too long ago.

“There were no seats; it was just a shell,” Tabern said during a phone interview last week. “There was nothing inside, besides birds’ nests and mummified possums from 30 years ago.” He noted that the outside of the train was still in good shape because it was stainless steel. But he knew it would take a tremendous amount of work to bring the Zephyr back to life.

Even so, he noted that Vreeland was willing to fund the restoration. Tabern was supposed to help market a family train operation, but the pandemic brought that to a halt. Vreeland kept everyone working, Tabern said. The railroad’s main business is hauling freight. And that has continued, allowing Vreeland to move ahead with the restoration project.

With time on his hands, Tabern said, he became the de-facto historian for the operation.

“I got to spend time in Hannibal and other towns along the original route, interviewing people,” Tabern said. “In the last 62 years, its had seven different owners.” He tracked down those previous owners or their children to see what the plans were for the train.

“We found out that no one has ever documented this,” he said. “There have been books about the Zephyrs, but no books specifically on the Mark Twain Zephyr itself.” With the information he gathered, Tabern was able, along with a few others, to produce the two books—Volume I and II of “Mark Twain Zephyr: History, Restoration & Rebirth.”

It will eventually be a three-volume set. The first book is the building of the train, the second book is about its operation, and the third book will be on the restoration—how it was brought back to life.

A few people made the trek to northern Wisconsin, curious to see what was being done to the train, Tabern said. That’s when they came up with the idea of a history tour—to bring that information to the people along the train’s original route. It was going to be a 13-presentation tour, but Hannibal recently added a second appearance.

Some people have donated memorabilia from the train, Tabern said, such as old ticket stubs or uniforms.

While the train was being restored, Tabern said they found a name, address and date of a former railroad worker from Philadelphia written on one of the walls. Using Ancestry.com, they were able to locate his relatives.

“Unfortunately, he died in 1997,” Tabern said. “His great grand nephew, was 31-years old, working in the Pentagon, and was killed on 9-11.” It’s these types of human stories that bring the train’s history to life. They sent the family photos of the signature.

The company owns 26 miles of track in northern Wisconsin. Once the train’s restoration is finished, they will put it into “operation” there. Tabern said he believes the work will be done by spring of next year.

“We are rebuilding it so it could travel,” he said. But it would require cooperation with freight railroads to use their track if they wanted to bring it out of Wisconsin and back on to its original route.

They are putting a new engine in the Zephyr, and a lot of the interior work on three of the five cars is done. At some point they will sell tickets to ride the train. The original baggage car will be turned into a museum about the train. It will include the oral histories of those people Tabern interviews during his speaking tour. “As long as they’re not camera shy,” he added. They will have a film crew with them to capture those memories.

In addition to the museum car, they will also have a full dining car and a tavern car. The rear observation car will have first-class seating for 40 passengers.

“For historical society groups and others, we will be offering charters, too,” Tabern said.

It has been a multi-million dollar restoration project, and because it is a for-profit railroad, he noted, the family-owned operation does want to recoup some of funds for its effort to keep the Zephyr’s history alive.

To see a video of the restoration process, go to: