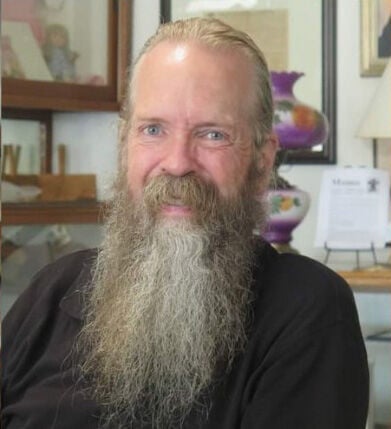 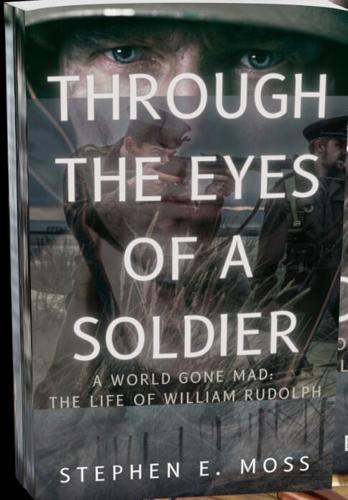 Stephen E. Moss, a local author, recently finished his book about World War I—“Through the Eyes of a Soldier: A World Gone Mad: The Life of William Rudolph.”

“In terms of genre,” he said, “it’s considered historical fiction.” He explained that although the book follows the conflicts accurately, the main character is more of a conglomeration of people.

“It is historically accurate,” he said. “All the incidents, all of the dates are correct. The main character is somewhat fictional.” He is based on a real person out of Moss’ family tree. “I used him as the basis for a larger scheme of things,” he added. “By not making it accurate to the person, I was able to move him around to get a look at what’s going on in the world.”

That gave Moss the flexibility to pick and choose the events he wanted to focus on.

He noted that he’s always been fascinated by how things are interconnected.

“When you look at only one aspect of something, you lose track of everything else going on around you, so this way, hopefully, you will see some more of the development of how things went from A to B to C,” he said. “What are all the components that brought you here,” he added. And then you start to see a whole different picture of those times.

“The actual William Rudolph did go to the first world war, the unit he’s in is correct, the events were taken out of the unit’s history—so everything was correct, and his first person perspective is from many-a-diaries of other soldiers, so it’s all true, but the actual man returned home at the end of the war,” he said. “I kind of pushed my fictional guy over into some other parts (of the conflict),” he added.

“He tramped around Europe and went over to the Russian revolution and did some other things,” Moss said. By doing it this way, it freed him up to look at other events going on during that time.

Moss said his original concept for the book was based on his fascination of military equipment and uniforms.

“I was thinking, how can you tell about that,” he said. Instead of being drier than dirt and citing just the facts, Moss decided on incorporating those facts onto a larger canvas of history.

Looking at this larger picture, he added, meant delving into what necessitated the changes in uniforms and equipment. He continued to build the story from there until he had an accurate picture of the war and the people doing the actual fighting.

Although, Moss has had other articles published, he said, this is his first novel. Even though he had the idea in his head for year, Moss said he didn’t start writing anything down until he was stationed at the Naval Air Station at Belle Chasse in Plaquemines Parish in Louisiana, just outside of New Orleans about 2008. He said this was a joint base, as he was with the U.S. Army, working in a classified environment. He spent 37 years in the service.

“It just continued to grow and grow from that,” he said about the book. As he continued to write, Moss received advice from his wife, Pamela, and his publisher, Woodrow Polston, that he needed to publish what he had written so far. So, he explained that this is just part one of the story. If it is well received, he said, he would endeavor to finish part two. The first part covers World War I and goes through the Great Depression. The second part, he said, would pick up right after that and go through World War II and up to the Korean War. And if there’s still more interest, Moss said he would go back a generation to the Civil War and the Spanish American War using the same concept but different characters from the same family.

Moss and his wife have lived in Louisiana for about four years. He didn’t find out until after he moved here, but the house he and Pamela bought once belonged to a cousin of his.

There is a book release party for Moss on May 14 at The Bridge café in downtown Louisiana from 8:30 a.m. to noon. The book is being released by Polston House Publishing. Full disclosure: Woodrow Polston, an employee of Lakeway Publishing, owns and operates the publishing house releasing Moss’ book.